It is worth mentioning that the packaging for the instruments is completely recyclable, thereby highlighting PerkinElmer’s commitment to sustainability.

With the latest launch, the company aims to solidify its global foothold in the food analysis space.

As part of the platform, the LQA300 system for wine identifies key quality markers, including alcohol, sugar, acidity, pH and density levels during every part of the winemaking process. PerkinElmer has confirmed that additional fit-for-purpose LQA300 system calibrations will be added for other liquid food sample types by the end of 2022, including but not limited to beer, alcoholic spirits, edible oils, soft drinks and more.

The LactoScope 300 system detects key markers, such as fat, protein and lactose levels in milk, cream and whey. Adulterants, including urea, ammonium sulfate, maltodextrine, sucrose and water, can also be identified in raw and processed milk.

The platform is equipped with detailed pre-developed workflows and intuitive touch-screen and software interfaces that help users place liquid samples into the instruments and receive results in a few seconds. Per management, the availability of intuitive, affordable and powerful testing and analysis solutions like the LQA300 and LactoScope 300 FT-IR systems provides customers the necessary insights to make more informed, real-time decisions. This, in turn, enables them to take necessary steps to improve quality, reduce waste and meet both regulatory and consumer demands.

Per a report by Grand View Research, the global food safety testing market was estimated to be $18 billion in 2018, growing at a CAGR of 7.7% between 2019 and 2025. Factors like increasing demand for packaged and processed food, rising incidents of chemical contamination in food processing industries, and growing consumer awareness about food safety are expected to drive the market.

Given the market potential, the recent launch is expected to significantly boost PerkinElmer’s business worldwide.

This month, PerkinElmer announced a long-term partnership with P1 Fuels, a key provider of advanced, fossil-free performance fuels for racing teams and the automotive industry. The company will work with P1 Fuels to develop and test fully renewable fuels to be used in the upcoming series of the FIA World Rally Championship. The ultimate goal of this collaboration is to aid the automotive sector, including motorsports, transition to climate-neutral, fossil-free fuels.

The same month, PerkinElmer announced V21 of its ChemDraw software, featuring the ability to import, animate and share 3D chemical structures natively in the Microsoft PowerPoint application with one click. 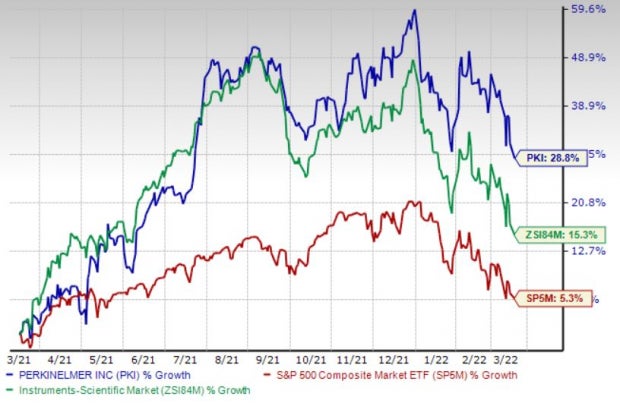 Henry Schein, carrying a Zacks Rank #2 (Buy) at present, has an estimated long-term growth rate of 11.8%. HSIC’s earnings surpassed estimates in the trailing four quarters, the average beat being 25.5%. You can see the complete list of today’s Zacks #1 Rank (Strong Buy) stocks here.

Henry Schein has gained 26.5% compared with the industry’s 2.7% growth over the past year.

Allscripts has an estimated long-term growth rate of 16.3%. MDRX’s earnings surpassed estimates in the trailing four quarters, the average beat being 64.8%. It currently flaunts a Zacks Rank #1.

Allscripts has gained 40.5% against the industry’s 55.5% fall over the past year.

AMN Healthcare has gained 27.3% against the industry’s 62.5% fall over the past year.