Abiomed, Inc. (ABMD - Free Report) is well poised for growth in the coming quarters, backed by strength in its Impella product line. A robust third-quarter fiscal 2022 performance, along with its solid global foothold, is expected to contribute further. Third-party reimbursement and forex woes persist.

The renowned global provider of medical products designed to assist or replace the pumping function of the failing heart has a market capitalization of $13.43 billion. The company projects 20% growth for the next five years and expects to maintain its strong performance. It has delivered an earnings surprise of 9.2% for the past four quarters, on average. 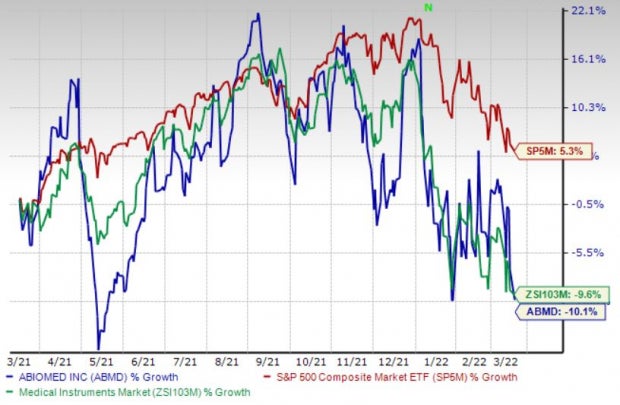 Strength in Impella: Abiomed’s flagship product line, Impella, has continued to be a growth driver, which raises our optimism. During its fiscal 2022 third-quarter earnings call, Abiomed confirmed that the pandemic has accelerated the rollout of its remote monitoring technology, Impella Connect. Presently, this technology is available at 1,564 hospitals worldwide. The company also confirmed that it recorded strength across its broad base portfolio, with Impella CP up 9%, Impella RP up 15% and Impella 5.5 up 65% in the reported quarter.

Solid Global Foothold: We are optimistic about the Impella support being widely integrated in hospitals throughout Germany and Japan. The company treated patients in Hong Kong, Australia, Singapore, Israel and, most recently in India, with Impella. In the third quarter of fiscal 2022, Impella product revenues displayed solid growth outside the United States. The company is also on track to launch Impella 5.5 in Germany. The Impella 5.0 is available at 666 sites while the Impella 5.5 with SmartAssist is currently available at 349 sites. The Impella RP is available at 650 sites.

Strong Q3 Results: Abiomed’s solid third-quarter fiscal 2022 results buoy optimism. The company saw strength in its global Impella revenues, which is impressive. In January, Abiomed announced successful results of the first-in-human EFS of the preCARDIA system. In November 2021, Abiomed announced favorable final results of the PROTECT III and Restore EF prospective studies. These developments raise our optimism on the stock. The company continued to witness a deleveraged balance sheet in the quarter under review.

Forex Woes: Abiomed’s reported sales and earnings are subject to fluctuations in foreign currency exchange rates, primarily the Euro and the Yen, because some of its international sales are denominated in local currencies and not in U.S. dollars. As the company does not hedge its exposure to foreign currency fluctuations from international operations at present, revenues and expenses occurring in future that are denominated in foreign currencies may be translated into U.S. dollars at less favorable rates, resulting in reduced revenues and earnings.

Third-Party Reimbursement: Abiomed depends on third-party reimbursement to its customers for market acceptance of its products. Sales of medical devices largely depend on the reimbursement of patients’ medical expenses by government healthcare programs and private health insurers. Without government reimbursement or third-party insurers’ payments for patient care, the market for Abiomed’s products will be limited.

Abiomed is witnessing a positive estimate revision trend for 2022. In the past 90 days, the Zacks Consensus Estimate for its earnings has moved 3.1% north to $4.36.

The Zacks Consensus Estimate for the company’s fourth-quarter fiscal 2022 revenues is pegged at $266.3 million, suggesting a 10.4% improvement from the year-ago quarter’s reported number.

Henry Schein, carrying a Zacks Rank #2 (Buy) at present, has an estimated long-term growth rate of 11.8%. HSIC’s earnings surpassed estimates in the trailing four quarters, the average beat being 25.5%. You can see the complete list of today’s Zacks #1 Rank (Strong Buy) stocks here.

Henry Schein has gained 26.5% compared with the industry’s 2.7% growth over the past year.

Allscripts has an estimated long-term growth rate of 16.3%. MDRX’s earnings surpassed estimates in the trailing four quarters, the average beat being 64.8%. It currently flaunts a Zacks Rank #1.

Allscripts has gained 40.5% against the industry’s 55.5% fall over the past year.

AMN Healthcare has gained 27.3% against the industry’s 62.5% fall over the past year.

Here's How G-III Apparel (GIII) is Poised Before Q4 Earnings