The biotech sector has been in the news in the past week due to key regulatory and pipeline updates. Nektar Therapeutics (NKTR - Free Report) plummeted on news of study failure of its lead drug while Moderna (MRNA - Free Report) announced pipeline progress.

Nektar Plunges on Drug Failure: Shares of Nektar plunged significantly after the company and partner Bristol Myers Squibb (BMY - Free Report) announced disappointing results from the phase III study — PIVOT IO-001. The study was evaluating the doublet therapy of Nektar’s lead candidate bempegaldesleukin in combination with Bristol Myers’ Opdivo (nivolumab) compared to Opdivo monotherapy as a first-line treatment for previously untreated unresectable or metastatic melanoma. The study did not meet the primary endpoints of progression-free survival (PFS) and objective response rate (ORR) as assessed by Blinded Independent Central Review on the basis of the review of the study for efficacy and safety by an independent Data Monitoring Committee (“DMC”). The DMC also notified both the companies that the third primary endpoint of overall survival (OS) did not meet statistical significance at the first interim analysis.

Consequently, Nektar and Bristol-Myers have decided to unblind the study and not perform additional analyses for the OS endpoint.  Moreover, based on the results from PIVOT IO-001, the companies have decided to discontinue enrollment and unblind the ongoing PIVOT-12 study in adjuvant melanoma, which is evaluating the doublet therapy of bempegaldesleukin in combination with Opdivo compared to Opdivo monotherapy in patients at high risk for recurrence after complete resection of melanoma.

Updates From Moderna:  Moderna announced that the first participant has been dosed in a phase I study of its experimental human immunodeficiency virus (HIV) trimer mRNA vaccine (mRNA-1574). The open-label, multicenter, randomized phase I study (HVTN 302) is designed to evaluate the safety and immunogenicity of experimental HIV trimer mRNA vaccines. The study is expected to enroll approximately 100 HIV-negative adults aged 18 to 55 years. The study is sponsored and funded by the Division of AIDS of the National Institute of Allergy and Infectious Diseases within the National Institutes of Health.

Exelixis Announces Liver Cancer Study Results: Exelixis (EXEL - Free Report) announced results from the final analysis of the second primary endpoint of OS from the late-stage COSMIC-312 study, which evaluated its lead drug Cabometyx (cabozantinib) in combination with Tecentriq versus Nexavar in patients with previously untreated advanced hepatocellular carcinoma (HCC). Patients were randomized approximately 2:1:1 to one of three arms: Cabometyx (40 mg) in combination with Tecentriq (n=432), Nexavar (n=217) or Cabometyx (60 mg; n=188). The results showed that the combination of Cabometyx, Tecentriq or Nevxavar did not improve OS nor worsened the same. Consequently, based on this outcome for OS and the rapidly evolving treatment landscape for previously untreated advanced HCC, Exelixis does not intend to submit a supplemental new drug application to the FDA.

The Nasdaq Biotechnology Index has gained 0.55% in the past five trading sessions. Among the biotech giants, Moderna has gained 14.57% during the period. Over the past six months, shares of Moderna have lost 65.91%. (See the last biotech stock roundup here: Biotech Stock Roundup: OCGN Down on Update, VYGR Surges on Deal & Other Updates) 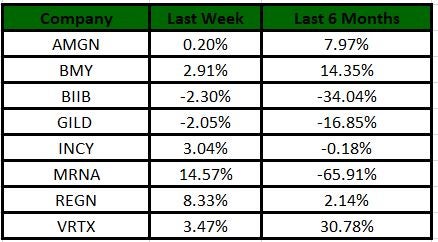 Here's Why You Should Retain Synchrony Financial (SYF) Now