Guess? posted adjusted earnings of $1.14 per share, down 3.4% from $1.18 reported in the year-ago quarter. Earnings in the quarter reflect a favorable impact from its share buybacks and its convertible notes transaction but a negative impact from currency translations. Earnings missed the Zacks Consensus Estimate of $1.15. Adjusted earnings fell 6.6% from $1.22 per share reported in fourth-quarter fiscal 2020. Increased adjusted operating profit was countered by higher other net expenses and tax rate.

Net revenues amounted to $799.9 million, which missed the consensus mark of $806.2 million. The metric went up 23.4% from $648.5 million reported in the year-ago quarter. On a constant-currency (cc) basis, net revenues increased 28.1% year over year. The upside can be attributed to solid performance across Americas Wholesale, Americas Retail and Europe businesses.

The company’s net revenues fell 5% from $842.3 million reported in fourth-quarter fiscal 2020. The downside can be attributed to permanent and temporary store closures. In addition, strength in the e-commerce business was somewhat negated by negative comp store sales across Europe and Asia stemming from the pandemic.

Revenues in the Americas Retail segment rallied 26% year over year on a reported and cc basis. Revenues fell 4% from fourth-quarter fiscal 2020 levels. Segmental operating margin came in at 17.2% compared with 12.8% in the year-ago quarter.

Revenues in the Americas Wholesale unit rallied 32% (up 33% at cc) year over year. Revenues were up 12% from fourth-quarter fiscal 2020 levels. Segmental operating margin came in at 25.4% compared with 23.5% in the year-ago quarter.

The Europe segment’s revenues rose 31% (up 40% at cc) year on year. Revenues dropped 4% from fourth-quarter fiscal 2020 levels. Segmental operating margin came in at 18.6% compared with 12.7% in the year-ago quarter.

Asia revenues declined 4% (down 1% at cc) year on year. The metric fell 20% from fourth-quarter fiscal 2020 levels. Segmental operating margin came in at 6.5% compared with 5% in the year-ago quarter.

Licensing revenues declined 10% (same at cc) year over year. The unit’s revenues inched up 1% compared with fourth-quarter fiscal 2020 levels. The operating margin came in at 90.5% compared with 95.3% in the year-ago quarter.

The company exited the quarter with cash and cash equivalents of $415.6 million as well as long-term debt and finance lease obligations of almost $61 million. Stockholders’ equity was $622.7 million. Net cash provided by operating activities for fiscal 2021 amounted to $131.6 million.

During fourth-quarter fiscal 2022, the company repurchased 2.3 million shares for $51 million. The company had $149 million worth of shares remaining under its previously-announced share repurchase program at the end of the quarter. On Mar 14, 2022, management expanded its repurchase authorization by $100 million to take the new capacity to $249 million.

In a separate press release, Guess? announced that it is appointing Dennis Secor as the interim chief financial officer, effective Apr 1, 2022. Mr. Secor, succeeds Katie Anderson, who is stepping down from the post. 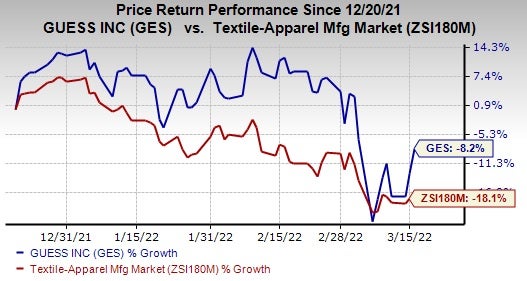 For the first quarter of fiscal 2023, the company expects revenues to be up in the low-teens year over year. The upside can be attributed to the year-ago period’s temporary store closures, wholesale growth and positive store comps.

For fiscal 2023, management anticipates revenues to increase in low-single digits year over year. The operating margin is expected to come in at roughly 10.5% in fiscal 2023. The outlook assumes that the company will not be any material pandemic-induced shutdowns. The view reflects major disruptions across Russia.

The Zacks Rank #4 (Sell) stock has declined 8.2% in the past three months compared with the industry’s decline of 18.1%.

Some Stocks to Consider

Gildan Activewear, which manufactures and sells various apparel products, sports a Zacks Rank #1 (Strong Buy) at present. Shares of Gildan Activewear have dropped 4.4% in the past three months. You can see the complete list of today’s Zacks #1 Rank stocks here.

The Zacks Consensus Estimate for Gildan Activewear’s 2022 sales and EPS suggests growth of 8.9% and 3.3%, respectively, from the year-ago reported figure. GIL has a trailing four-quarter earnings surprise of 66.6%, on average.

Columbia Sportswear currently sports a Zacks Rank #1. The company has a trailing four-quarter earnings surprise of 203.3%, on average. Shares of COLM have increased 2% in the past three months.

The Zacks Consensus Estimate for Columbia Sportswear's current financial-year sales suggests growth of 17.7% and that for EPS reflects growth of 8.1% from the year-ago period's reported figure.

Delta Apparel currently flaunts a Zacks Rank #1. The company has a trailing four-quarter earnings surprise of 21.3% on average. Shares of DLA have increased 1.3% in the past three months.

The Zacks Consensus Estimate for Delta Apparel's current financial year’s sales and earnings per share suggests growth of 12.3% and 19.1%, respectively, from the year-ago period's reported numbers.