Marinus Pharmaceuticals, Inc. (MRNS - Free Report) announced that the FDA approved the use of oral suspension Ztalmy (ganaxolone) for the treatment of seizures associated with cyclin-dependent kinase-like 5 deficiency disorder (CDD) in patients aged two years and above.

CDD is a form of rare, genetic epilepsy with refractory seizures.

Following the FDA nod, Ztalmy became the first and only treatment to be approved for treating seizures associated with CDKL5 deficiency disorder in patients aged two years and above. The product is expected to be launched in July in the United States.

Shares of Marinus were up 16.4% following the announcement of the news on Friday. The MRNS stock has dipped 15.9% so far this year compared with the industry’s decline of 12.6%. 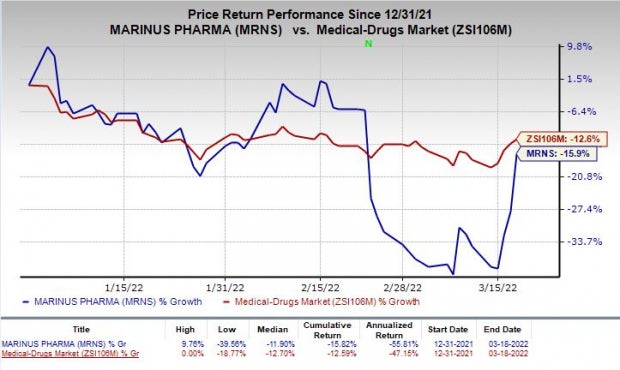 The latest FDA nod was based on data from the phase III Marigold study, which evaluated Ztalmy for the above-mentioned indication. Data from the same showed that treatment with Ztalmy led to a significant 30.7% median reduction in the 28-day major motor seizure frequency compared with a 6.9% median reduction for those receiving placebo — the primary endpoint.

Per the company, ganaxolone, a positive allosteric modulator of GABAA receptors, is being developed as intravenous or IV and oral formulations. Apart from the oral formulation, the company is developing ganaxolone in IV formulations and aims to maximize therapeutic reach to adult and pediatric patient populations in both acute and chronic care settings.

Marinus is also evaluating ganaxolone for other indications. In January 2021, the company enrolled the first patient in the phase III RAISE study of IV ganaxolone for the treatment of Refractory Status Epilepticus. The top-line data from the study is expected in the second half of 2022.

The successful development of ganaxolone for additional indications will help the product treat a broader patient population and drive growth in the days ahead.

Catalyst Pharmaceuticals’ earnings estimates have been revised 42% upward for 2022 over the past 60 days. The CPRX stock has gained 12.5% year to date.

Earnings of Catalyst Pharmaceuticals have surpassed estimates in two of the trailing four quarters, met the same once and missed the same on the other occasion.

Gemini Therapeutics’ loss per share estimates have narrowed 57.3% for 2022 over the past 60 days.

Earnings of Gemini Therapeutics have surpassed estimates in three of the trailing four quarters and missed the same on the other occasion.

Minerva Neurosciences’ loss per share estimates have narrowed 20.4% for 2022 over the past 60 days.

Earnings of Minerva Neurosciences have surpassed estimates in one of the trailing four quarters, met the same once and missed the same on the other two occasions.