Catalent, Inc. (CTLT - Free Report) recently announced the completion of a $30-million (€27 million) project at its facility in Limoges, France. The project completion is expected to convert the site into a European center of excellence for biopharmaceutical development, drug product fill/finish services and packaging.

It is worth mentioning that the project has witnessed a complete modernization of the Limoges site to handle large molecule programs, with additional capacity for small molecule injectable dosage form development. A new small-to-mid-scale flexible filling line has also been installed, which is capable of handling vials, syringes or cartridges under barrier isolator technology. Additionally, enhancements have been made to analytical and quality control laboratories, thereby supporting clinical packaging, cold storage, and regulatory capabilities.

With the latest facility transformation, Catalent is expected to significantly expand its global footprint in the Biotherapeutics space and solidify its position in the Biologics business worldwide.

Catalent’s latest project completion is expected to expand Biologics’ global network. This includes early phase integrated clinical development through clinical supply services and small-scale commercial manufacturing. This will enable smooth tech transfer of projects as they progress to late-stage and larger-scale commercial supply from other Catalent manufacturing facilities in Europe and North America.

Per management, the project is likely to transform the Limoges site into a world-class facility to support the advancement of early phase and small-scale commercial biologic drugs. It is also expected to provide customers integrated services to expedite programs toward and through the clinic and ultimately to market. The Limoges facility, in association with other Catalent facilities in Europe and the United States, will likely provide globally integrated solutions for a range of therapies.

Per a report by Research and Markets, the global biopharmaceutical market was estimated to be $330.7 billion in 2021 and is anticipated to reach $478.08 billion by 2026 at a CAGR of approximately 7.7%. Factors like rising chronic diseases, an increase in the elderly population and the growing adoption of biopharmaceuticals globally are expected to drive the market.

Given the market potential, the recent facility modernization is expected to significantly boost Catalent’s business worldwide.

This month, Catalent tied up with TFF Pharmaceuticals, Inc. with respect to the latter’s patented Thin Film Freezing (“TFF”) technology. The tie-up agreement focuses on the generation, testing and manufacture of dry powder formulations for a variety of biotherapeutics via the application of the TFF technology.

In January, the company announced that it completed a $10-million expansion in its isolator units at its Malvern, PA and Dartford, U.K. facilities to provide advanced containment capabilities for the micronization of highly potent drug compounds. 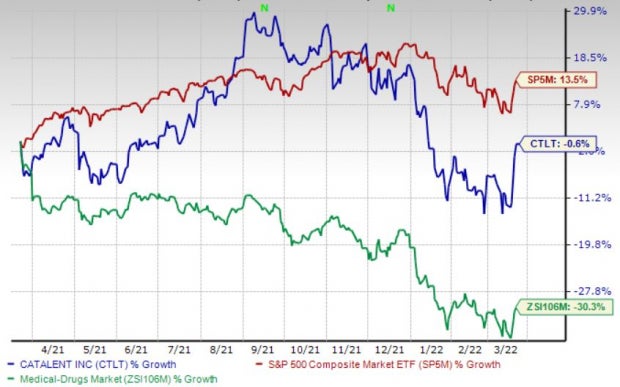 Henry Schein, flaunting a Zacks Rank #1 (Strong Buy) at present, has an estimated long-term growth rate of 11.8%. HSIC’s earnings surpassed estimates in the trailing four quarters, with the average being 25.5%. You can see the complete list of today’s Zacks #1 Rank stocks here.

Henry Schein has gained 31.6% compared with the industry’s 8.4% growth over the past year.

Allscripts has an estimated long-term growth rate of 16.3%. MDRX’s earnings surpassed estimates in the trailing four quarters, with the average being 64.8%. It currently carries a Zacks Rank #2 (Buy).

Allscripts has gained 40.8% against the industry’s 50.5% fall over the past year.

AMN Healthcare has an estimated long-term growth rate of 16.2%. AMN’s earnings surpassed estimates in the trailing four quarters, with the average being 20%. It currently sports a Zacks Rank #1.

AMN Healthcare has gained 37.9% against the industry’s 55.1% fall over the past year.