Why is Hold Strategy Appropriate for CNO Financial (CNO)?

CNO’s growth is evident from its VGM Score  of B. Here V stands for Value, G for Growth and M for Momentum with the score being a weighted combination of all three factors. CNO Financial has market cap of $2.99 billion.

Over the past 30 days, CNO Financial has witnessed its 2022 earnings estimate move 0.8% north. CNO’s earnings even managed to beat estimates in all its trailing four quarters, the average being 25.5%.

CNO’s production metrics exceeded the pre-pandemic levels in most areas in the last reported quarter. The Worksite division is poised well for growth.
Its capital and investment portfolio is solid with ample liquidity.

CNO has been taking measures for a while to cut down on expenses, on the back of which benefits and expenses declined in 2019 and 2020, respectively. We think that its cost-curbing measures will aid margins going forward. CNO Financial will pursue further strategic actions to control costs and enhance its earnings profile.

As mentioned earlier, CNO Financial is also consistently making hefty investments in technology to boost its agent productivity, and sales and advertising.

Acquisitions have also helped it bolster its portfolio over time. For instance, CNO bought DirectPath in February 2021, which added to its Worksite division capabilities. The buyout is expected to bring best-in-class benefits management services and enhanced enrollment capabilities to CNO, which are in high demand by both employers as well as employees.

Its capital management strategy will surely impress investors. CNO Financial is committed to deploy 100% excess capital, which should attract investors’ attention. In 2021, CNO returned capital worth $468.1 million to its shareholders via $402.4 million of share buybacks and $65.7 million through dividends.

However, its weak return on equity raises a concern.

CNO Financial is also poised for long-term growth on the back of a solid alternative investment performance, product and service launches, and strong contributions from its Consumer Division.

Shares of CNO have gained 1.7% in a year’s time against its industry's decline of 4.6%. 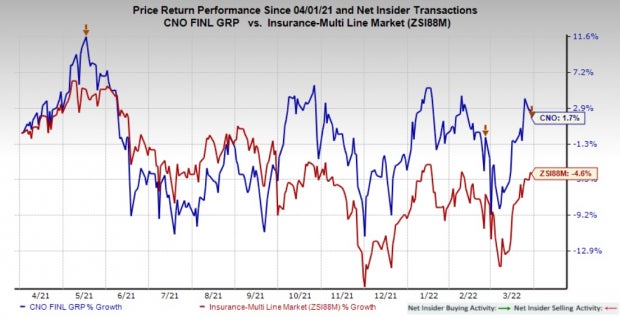 Horace Mann’s earnings surpassed estimates in each of the last four quarters, the average being 22.80%. The Zacks Consensus Estimate for HMN’s 2022 earnings suggests an improvement of 1.1%, while the same for revenues suggests growth of 1% from the corresponding year-ago reported figures. The consensus mark for Horace Mann's 2022 earnings has moved 8.4% north in the past 60 days.

The bottom line of Old Republic outpaced earnings estimates in all the last four quarters and missed the mark once, the average surprise being 38.74%. The Zacks Consensus Estimate for ORI’s 2022 earnings has moved 3.7% north in the past 60 days. ORI has a Value Score of B.

Berkshire Hathaway’s earnings surpassed estimates in three of the trailing four quarters (while missing the mark in one), the average surprise being 11.86%. The Zacks Consensus Estimate for BRK.B’s 2022 earnings suggests an improvement of 6.1% from the year-ago reported figure.

Old Republic and Berkshire Hathaway’s stocks have gained 20.3% and 39%, respectively, in a year. Meanwhile, shares of Horace Mann have lost 3.2% in the same time frame.