The company’s bottom line came in at 73 cents per share came, which surpassed the Zacks Consensus Estimate of 44 cents. Earnings surged 62% from 45 cents reported in the prior-year quarter. The upside was led by higher income from operations and equity method investment earnings.

Net sales amounted to $955 million, up 7% year on year. Price/mix increased 12%, mainly reflecting gains from pricing actions in the company’s business segments undertaken to counter input, manufacturing and transportation cost inflation. Volume fell 5% due to reduced export volume and shipments to retail channels. Lamb Weston increased its shipments to restaurant and foodservice channels across North America. However, growth in the region was tempered by reduced restaurant traffic caused by the spread of the Omicron variant. Also, industry-wide supply chain-related challenges led to the downside. The top line missed the Zacks Consensus Estimate of $962.4 million.

Gross profit came in at $221 million, up $24.3 million, driven by favorable price/mix. Escalated manufacturing and distribution costs on a per pound basis along with reduced sales volumes were a concern for the metric. Increased costs per pound reflect double-digit cost inflation from key inputs, mainly including raw materials like edible oils, ingredients and raw potatoes, as well as escalated transportation, packaging and labor costs. Higher costs per pound were also a result of labor and commodities shortages on production run-rates and reduced raw potato utilization rates. Such cost increases were somewhat offset by supply chain productivity savings.

Adjusted EBITDA (including unconsolidated joint ventures) rose from $52.5 million to $219.6 million on the back of increased income from operations and equity method investment earnings.

Sales in the Global segment increased 2% to $487.9 million. Volumes fell 6% and price/mix increased 8%. Price/mix benefited from the favorable mix as well as domestic and international product and freight pricing actions to counter inflation. Volumes were hurt by reduced export shipments. Product contribution margin in the segment declined 8% to $73 million.

Foodservice sales soared 34% to $294.5 million. Volumes and Price/mix increased 22% and 12%, respectively. Price/mix benefited from the favorable mix as well as product and freight pricing actions to counter inflation. Volumes benefited from the continued rebound in demand at full-service restaurants and in non-commercial channels, like lodging and hospitality, healthcare, schools and universities, sports and entertainment and workplace environments. Product contribution margin increased 52% to reach $106.7 million.

In the Retail segment, sales went down 12% to $143.6 million. Price/mix advanced 12%, but volumes declined 24%. Price/mixbenefited from product and freight pricing actions across the branded and private label portfolios as well as a favorable mix. Lower shipments of private label products and branded products hurt sales volume. Product contribution margin fell 5% to $31.6 million.

Lamb Weston ended the quarter with cash and cash equivalents of $428.6 million, long-term debt and financing obligations (excluding the current portion) of $2,697 million and total shareholders’ equity of $392.3 million. The company generated $174 million as net cash from operating activities for the 39 weeks ended Feb 27, 2022. Capital expenditures (including IT expenditure) amounted to $227 million during this time. For fiscal 2022, the company expects cash used for capital expenditures (excluding buyouts) to be nearly $325 million.

During the third quarter, management paid out dividends worth $34.3 million and bought back shares worth $50 million, thereby returning $84.3 million to its shareholders. 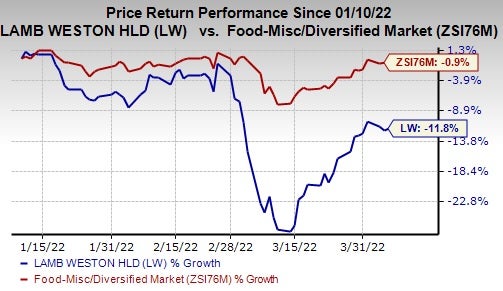 For fiscal 2022, management expects net sales growth to exceed its long-term goal of low-to-mid single digits. The company expects fourth-quarter fiscal 2022 net sales growth to be mainly fueled by price/mix, reflecting its pricing actions undertaken to counter input and transportation cost inflation. Quarterly sales volumes are expected to be tempered by disruptions related to its production and logistics network. Also, the unfavorable impact of inflation and COVID-19 variants on restaurant traffic and consumer demand is likely to put pressure on the volumes.

Net income and adjusted EBITDA (including unconsolidated joint ventures) are likely to be under pressure in the fourth quarter of fiscal 2022. The company continues to navigate through major inflation for key production inputs, transportation and packaging. Also, industry-wide operational challenges like labor and commodity shortages might be a concern. It also expects raw potato costs on a per pound basis to increase. As a result, management anticipates a fiscal 2022 gross margin in the range of 19-20% percent. Earlier, the company had anticipated the metric to come in the range of 18-20%. For the fourth quarter of fiscal 2022, management is projecting a gross margin of 19-21%.

Apart from this, the company expects the continued investments in information technology to cause a year-over-year increase in SG&A expenses during the fiscal fourth quarter.

Shares of the Zacks Rank #4 (Sell) company have declined 11.8% in the past three months compared with the industry’s fall of 0.9%.

Tyson Foods, a meat provider, currently sports a Zacks Rank #1 (Strong Buy). Shares of Tyson Foods have increased 0.2% in the past three months. You can see the complete list of today’s Zacks #1 Rank stocks here.

The Zacks Consensus Estimate for Tyson Foods’ current financial year sales and earnings per share (EPS) suggests growth of 9.5% and 5.6%, respectively, from the year-ago reported figure. TSN has a trailing four-quarter earnings surprise of 32.2%, on average.

Pilgrim’s Pride, which produces, processes, markets and distributes fresh, frozen, and value-added chicken and pork products, sports a Zacks Rank #1. Shares of Pilgrim’s Pride have declined 8.7% in the past three months.

The Zacks Consensus Estimate for Pilgrim’s Pride’s current financial year EPS suggests growth of 19.7% from the year-ago reported number. PPC has a trailing four-quarter earnings surprise of 24.9%, on average.

Flowers Foods, the producer and marketer of packaged bakery products, currently carries a Zacks Rank #2 (Buy). Shares of Flowers Foods have decreased 6.7% in the past six months.

The Zacks Consensus Estimate for Flowers Foods’ current financial year sales and EPS suggests growth of 7.2% and 4%, respectively, from the year-ago reported figure. FLO has a trailing four-quarter earnings surprise of 9%, on average.