It is worth mentioning that these kits are the first on the market that have been developed to carry out the abovementioned function. Apart from this, these kits are easily automatable and can be miniaturized to a small sample volume, thereby substantially enhancing throughput to 384-well plates.

Benefits of the Assays

Recombinant therapeutic proteins, like monoclonal antibodies, some vaccines and other biologics, must be free of residual HCP impurities to avert immunogenicity or lower potency, stability or overall effectiveness of a drug.

Per management, the capability to identify, quantify and eliminate CHO HCP impurities during the biopharmaceuticals manufacturing process continues to pose a challenge. These kits have been developed to make this important step more effective and efficient within existing workflows, thereby providing quality control and successful biotherapeutics. 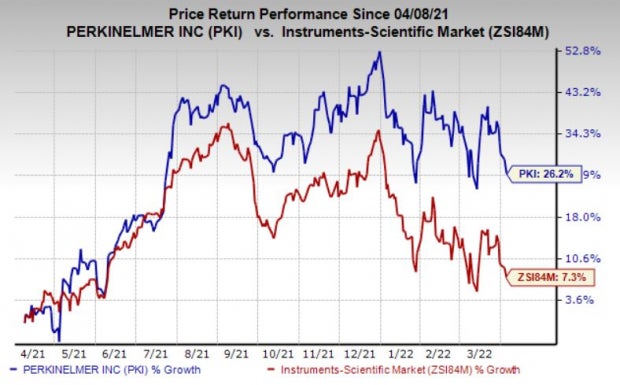 PerkinElmer can aid scientists with end-to-end workflow solutions, which range from early-stage drug discovery and development with assays, cell lines, microplates and plate readers to later-stage research and development with high-content screening, image analysis and data management, automated liquid handling and more through the addition of these assays.

In the same month, the company announced a long-term collaboration with P1 Fuels — a specialist in the formulation, production and delivery of advanced, fossil-free performance fuels for racing teams and the automotive industry. Through this deal, PerkinElmer will work with P1 Fuels to aid the automotive sector, including motorsports, shift to climate-neutral, fossil-free fuels.

AMN Healthcare has an estimated long-term growth rate of 16.2%. AMN’s earnings surpassed estimates in each of the trailing four quarters, the average surprise being 20%. It currently sports a Zacks Rank #1 (Strong Buy). You can see the complete list of today’s Zacks #1 Rank stocks here.

AMN Healthcare has gained 34.5% against the industry’s decline of 55.1% over the past year.

Edwards Lifesciences, carrying a Zacks Rank #2 (Buy), has an estimated long-term growth rate of 13.9%. EW’s earnings surpassed estimates in three of the trailing four quarters and missed once, the average surprise being 6.5%.

Edwards Lifesciences has appreciated 43.1% against the industry’s 0.2% fall over the past year.

Henry Schein has an estimated long-term growth rate of 11.8%. HSIC’s earnings surpassed estimates in each of the trailing four quarters, the average surprise being 25.5%. It currently has a Zacks Rank #2.

Henry Schein has surged 29.2% compared with the industry’s rally of 8.5% over the past year.