Methanex Corporation’s (MEOH - Free Report) shares have gained 22.3% over the past three months. The company has also outperformed its industry’s decline of 8.5% over the same time frame. Moreover, it has topped the S&P 500’s 6.4% decline over the same period. 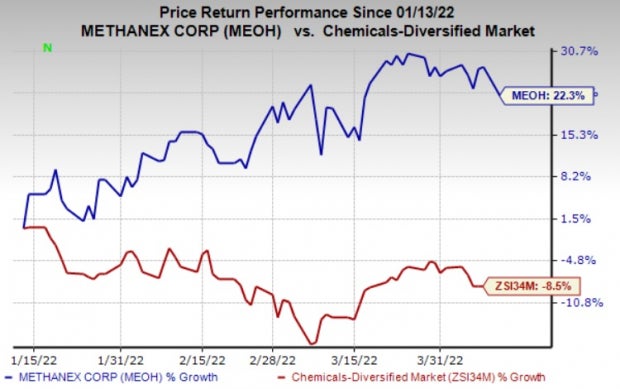 Methanex is gaining from healthy demand for methanol on the back of the ongoing economic recovery. The strong fundamentals of the methanol industry are driving its results. Per the company, global methanol demand increased around 5% year over year in 2021 on the back of a strong recovery in demand for traditional chemical applications. Demand in energy also recovered last year.

The company is also benefiting from an upswing in methanol pricing. Strong methanol demand coupled with ongoing industry supply challenges is driving methanol prices. The company’s average realized price for methanol was $445 per ton in the fourth quarter, up roughly 57.8% from $282 per ton in the prior-year quarter. Higher demand and robust prices are driving its top line.

Methanex also remains committed to strengthen its balance sheet and maintain its strong liquidity position. It is well placed to maintain its business, execute attractive growth opportunities and continue the long track record of returning excess cash to shareholders through dividend payouts and share repurchases. It returned $68 million to shareholders through share repurchases and regular dividend in the fourth quarter.

Nutrien, sporting a Zacks Rank #1 (Strong Buy), has an expected earnings growth rate of 108.7% for the current year. The Zacks Consensus Estimate for NTR's current-year earnings has been revised 37.4% upward over the last 60 days. You can see the complete list of today’s Zacks #1 Rank stocks here.

Nutrien beat the Zacks Consensus Estimate for earnings in three of the last four quarters while missing once. It has a trailing four-quarter earnings surprise of roughly 60.3%, on average. NTR has rallied around 98% in a year.

AdvanSix, carrying a Zacks Rank #1, has an expected earnings growth rate of 64.9% for the current year. ASIX's consensus estimate for current-year earnings has been revised 53.1% upward in the past 60 days.

AdvanSix beat the Zacks Consensus Estimate for earnings in each of the trailing four quarters, the average being 46.9%. ASIX has rallied around 73% in a year.

Commercial Metals beat the Zacks Consensus Estimate for earnings in three of the last four quarters while missed once. It has a trailing four-quarter earnings surprise of roughly 13.7%, on average. CMC has gained around 47% in a year.