Nektar and Bristol-Myers were developing the combination regimen of bempeg and Opdivo targeting multiple oncology indications under a collaboration agreement signed in 2018. The companies have decided to discontinue these two studies as well as all other ongoing studies in the program following the dismal study data readout. Please note that another registrational study evaluating the combo regimen as a first-line treatment for melanoma patients failed last month. The companies discontinued the development of the combination regimen in melanoma patients, including another clinical study in adjuvant melanoma.

The final analysis of the phase II PIVOT-10 study showed that the bempeg and Opdivo doublet therapy did not reach an efficacy threshold for ORR to support continuing evaluation of the regimen in patients with locally advanced or metastatic urothelial cancer or bladder cancer.

Nektar and Bristol-Myers were also evaluating the bempeg doublet regimen in patients with muscle-invasive bladder cancer in a pivotal study. Two ongoing phase I/II studies were evaluating the regimen in recurrent and/or refractory pediatric tumors. The failure of bempeg plus Opdivo in pivotal studies in three oncology indications has led the companies to discontinue the development of the combo regimen. The companies will work jointly to discontinue the clinical program over the coming months.

The failure of the bempeg plus Opdivo program is a major setback for Nektar as bempeg is its leading pipeline candidate. Moreover, the candidate's development in combination with Opdivo was its only pivotal stage program. Other development programs for bempeg and other pipeline candidates are in early- to mid-stage studies. The failure is likely to delay Nektar’s prospects of becoming a commercialized biotech by several years. Nektar shares have declined 54.4% so far this year, majorly due to the failure of the bempeg plus Opdivo program, compared with the industry’s decrease of 15.6%. 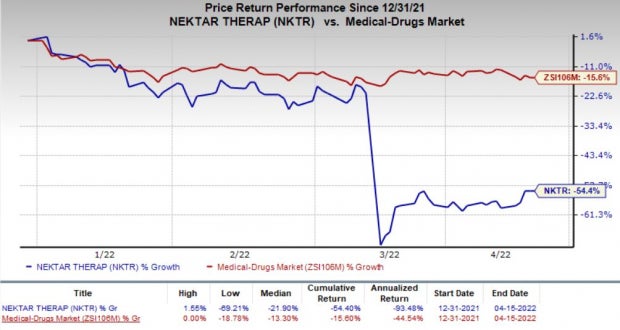 The failure of this program has also hurt Bristol-Myers as the company had paid Nektar $1 billion upfront as part of their collaboration agreement and also invested $850 million in Nektar’s common shares at a price of $102.60 per share, which declined almost 94% as of last week.