KemPharm, Inc. (KMPH - Free Report) announced that it has initiated dosing in a phase I study to evaluate its d-methylphenidate prodrug, serdexmethylphenidate (SDX) to assess its relative cardiovascular safety compared to the immediate-release and long-acting formulations of Novartis’ (NVS - Free Report) central nervous system (CNS) drug, Ritalin. Data from the study is expected by the third quarter of 2022.

KemPharm’s SDX is the sole active pharmaceutical ingredient of its lead pipeline candidate, KP1077, which is being developed as a potential treatment for idiopathic hypersomnia (IH), a rare sleep disorder. The company is planning to initiate two mid-stage studies in 2022 to evaluate KP1077 as treatments for IH and narcolepsy.

Shares of KemPharm were up 8.7% on Tuesday, following the announcement of the above news. However, the stock has declined 48.3% so far this year against the industry’s increase of 18.4%. 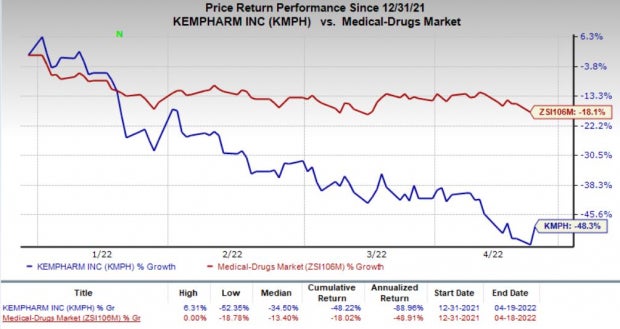 KemPharm stated that it is conducting an early-stage study on SDX for additional data, which will support the development of its SDX-based products, particularly KP1077, going forward. A potential positive data from the study will help the company to differentiate its SDX product from other available methylphenidate-based products as a CNS-stimulant based on improved cardiovascular safety.

The company believes that an improved cardiovascular safety profile for SDX may allow administration of higher dose to CNS patients, leading to better efficacy than currently available stimulants. It also mentioned that off-label use of stimulant-based treatments in IH and other sleep disorders is resulting in patient dissatisfaction due to inadequate efficacy. A better cardiovascular safety profile for SDX will likely help the company in successfully developing KP1077 as a treatment for IH going forward.

We note that Novartis’ Ritalin is approved for treating attention deficit hyperactivity disorder (ADHD). Novartis has been marketing the drug since 1955.

KemPharm’s recently approved drug, Azstarys, is also an SDX-based therapy for ADHD. The company received FDA approval for the drug last year. The company has another approved drug, Apadaz, in its portfolio that is approved for the management of acute pain. The successful development of pipeline candidates will boost the company’s prospect.

Earnings of Trevi surpassed estimates in two of the trailing four quarters and missed the same on the other two occasions, the average beat being 5.09%.