Is the Housing Market Cooling?

The pandemic had the effect of expanding a housing market that was already under pressure from the demographic phenomenon of the millennial generation trying to settle down. This trend is very broad-based across income groups.

The sudden need to operate from home didn’t, however, affect the entire population in the same way because many were engaged in the services sector, where customer contact was a necessity. So it was a much smaller segment of the population that drove this change. Additionally, it was short-lived, since a lot of the pandemic-related spurt in demand is now in the rearview mirror.

This is one factor taking off the heat. The other is that some demand has already been satisfied despite the high prices that prevailed through most of last year and the first few months of this year. The S&P CoreLogic Case-Shiller 20-City Composite Home Price Index shows that prices have risen consistently, for every single month between Jan 2021 and Jan 2022, the latest month for which the data is available. So it’s clear that home prices remain high.

This can happen for a couple of reasons: the first being that demand continues to increase, regardless of the fact that prices are increasing; and second, that inventory is so depleted that it’s insufficient to satisfy demand, even if it is falling.

Housing market data comes from a number of places, including the Census Bureau, the HUD and the National Association of Realtors to name a few, and they are released at different times and for different periods, all of which makes the data a little difficult to correlate and study. But the trend lines still tell the story as we can see in the chart below: 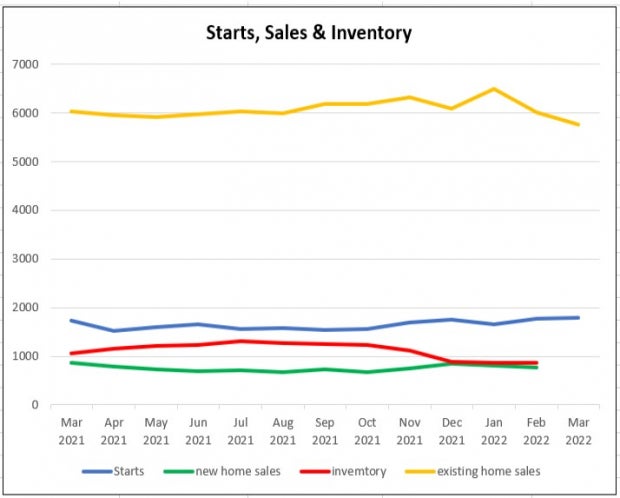 It’s clear from the above that new home sales (green line) are moving in a tight range. They dipped in April last year and then moved slightly up and down from month to month, and in an upward trend from October onward.

The inventory situation (red line) has also been tight, a rising trend up to Jul 2021 before trending down gradually up to November and then dropping sharply from December onward.

Housing starts (blue line) are showing a rising trend since October, an indication that the demand supply imbalance is on its way to being sorted out.

My reading of the above is that demand is still pretty strong and inventory-constrained, which is the reason that prices have refused to come down to date.

But rising interest rates have the effect of increasing mortgage rates, which also bring down demand, as seen in the chart below: 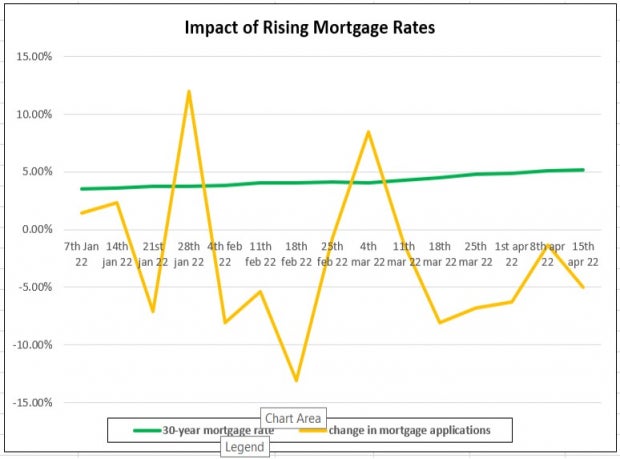 As is clear from the above chart, the 30-year mortgage rate (green line) has been rising quite consistently from Jan 2022. Mortgage applications (orange line) have moved around quite a bit, but mostly in negative territory. So mortgage applications, and by the corollary, home sales are dropping off.

The above analysis paints an optimistic picture of a gradually cooling housing market, where higher mortgage rates artificially restrain demand until inventories gradually increase as a result of new homes becoming available.

What's in the Offing for Mondelez (MDLZ) in Q1 Earnings?