Buy 5 Mid-Cap Stocks Ahead of Earnings Results Next Week

The first-quarter 2022 earnings season has gathered momentum this week. Next week will be a big one with 879 companies slated to release their quarterly numbers. Aside from large-cap companies, several mid-cap companies will also report next week.

The last quarter was not a good one for Wall Street. The year started with the resurgence of the Omicron variant of coronavirus, which was highly infectious but less deadly. Normal economic activities suffered to some extent in January due to Omicron.

However, the major concern for the U.S. economy was galloping inflation. Several measures of inflation like consumer price index, producer price index and personal consumption expenditure price index stayed at a 40-year high during the first quarter.

Moreover, the Russian military invasion of Ukraine, which started on Feb 24 and is continuing, has made the situation worse. The United States and the European Union have imposed several stringent financial sanctions on Russia including import restriction on crude oil and natural gas.

Russia is a major supplier of oil and gas and several basic materials in Europe. As a result, prices of crude oil, natural gas, platinum, palladium, coal, nickel and steel soared globally. These materials are a vital input to several finished products.

Finally, in order to combat skyrocketing inflation, the Fed systematically terminated the $120 billion bond-buy program in March and raised the benchmark by 25 basis points in its March FOMC. This was the first hike in interest rate in more than three years.

The March FOMC minutes also revealed that Fed officials almost unanimously agreed that the central bank must reduce the size of its $9 trillion balance sheet by around $95 per month starting May. Moreover, the minutes revealed that most officials have agreed that the Fed must raise the interest rate by 50 basis points in the next two FOMC’s in May and June.

Five mid-cap companies will report earnings results next week. Each of these stocks carries either Zacks Rank #2 (Buy) and has a positive Earnings ESP. You can see the complete list of today’s Zacks #1 Rank (Strong Buy) stocks here.

Our research shows that for stocks with the combination of a Zacks Rank #3 (Hold) or better and a positive Earnings ESP, the chance of an earnings beat is as high as 70%. These stocks are anticipated to appreciate after their earnings releases. You can uncover the best stocks to buy or sell before they’re reported with our Earnings ESP Filter.

The chart below shows the price performance of our five picks in the last quarter. 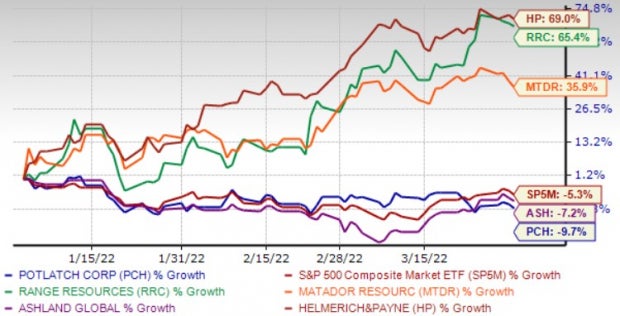 PotlatchDeltic is a real estate investment trust (REIT) with acres of timberland in Alabama, Arkansas, Idaho, Minnesota and Mississippi. PotlatchDeltic, a certified forest practices leader, is committed to providing superior returns to stockholders through long-term stewardship of its forest resources. PCH also conducts a land sales and development business and operates wood products manufacturing facilities through its taxable REIT subsidiary.

PCH has an Earnings ESP of +7.24%. The Zacks Consensus Estimate for current-year earnings improved 1.9% over the last 30 days. PotlatchDeltic recorded earnings surprises in the three out of the last four reported quarters, with an average beat of 6.36%. The company is set to release earnings results on Apr 25, after the closing bell.

Range Resources has extensive oil and gas resources in key regions like Marcellus Shale & North Louisiana. RRC is ideally positioned to reap benefits in the long term from its projects in the Appalachian Basin.

Range Resources’ core operating regions in the basin comprise a huge inventory of low-risk drilling inventories that will likely fetch incremental gas production. As most of its production comprises natural gas, RRC is well-positioned to capitalize on mounting clean energy demand.

RRC has an Earnings ESP of +2.68%. It has an expected earnings growth rate of 99.5% for the current year. The Zacks Consensus Estimate for current-year earnings improved 9.5% over the last 30 days.

Range Resources recorded earnings surprises in three out of the last four reported quarters, with an average beat of 8.6%. The company is set to release earnings results on Apr 26, after the closing bell.

Matador Resources’ upstream operations are mainly concentrated in the Delaware Basin, which is among the country’s most prolific oil and gas plays. Since 2011, MTDR significantly boosted its Delaware acreage, which now covers 124,800 net acres.

MTDR has an Earnings ESP of +2.75%. It has an expected earnings growth rate of more than 100% for the current year. The Zacks Consensus Estimate for current-year earnings improved 20.7% over the last 30 days.

Matador Resources recorded earnings surprises in the last four reported quarters, with an average beat of 42.5%. The company is set to release earnings results on Apr 26, after the closing bell.

Ashland Global is also benefiting from a strong rebound in industrial demand. Moreover, ASH remains committed to boosting its free cash flows and maintaining its dividend amid the challenging environment.

ASH has an Earnings ESP of +9.97%. It has an expected earnings growth rate of 33.3% for the current year (ending September 2022). The Zacks Consensus Estimate for current-year earnings improved 1.8% over the last 30 days. Ashland Global is set to release earnings results on Apr 26, after the closing bell.

Helmerich & Payne is engaged in the contract drilling of oil and gas wells in the United States and internationally. HP’s technologically-advanced FlexRigs are much in demand and that company has already upgraded most of its drilling feet with the latest technology.

Customer acceptance of Helmerich & Payne's digitization efforts has led to cost reduction, improvement in efficiency and higher profits. HP’s low debt levels, both on an absolute and relative basis, are also positives.

HP has an Earnings ESP of +8.14%. It has an expected earnings growth rate of 68.5% for the current year (ending September 2022). The Zacks Consensus Estimate for current-year earnings improved 10.9% over the last 30 days. Helmerich & Payne is set to release earnings results on Apr 27, after the closing bell.