Shares of RHI have appreciated 24.8% in the past year compared with 3.2% growth of the industry it belongs to. 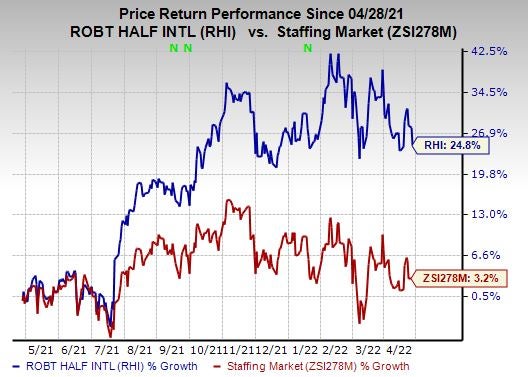 Total contract talent solutions revenues came in at $1,155.7 million and surged 30% on a year-over-year basis.

Permanent placement talent solutions revenues came in at $186.8 million and surged 67.2% on a year-over-year basis.

The quarter had 62.4 billing days compared with 62.3 reported in first-quarter 2021. At present, Robert Half operates 317 talent solutions locations worldwide with 83 sites in 17 countries outside the United States.

Robert Half ended the quarter with a cash and cash equivalent balance of $550.3 million compared with $619 million witnessed at the end of the previous quarter.

RHI generated $69 million of cash from operations while capital expenditures were $15 million. Robert Half paid out $47 million of dividends and repurchased shares worth $55 million in the reported quarter.

Omnicom reported impressive first-quarter 2022 results, wherein the company’s earnings and revenues surpassed the Zacks Consensus Estimate. Earnings of $1.39 per share beat the consensus mark by 8.6% and increased 4.5% year over year, driven by a strong margin performance. Total revenues of $3.4 billion surpassed the consensus estimate by 5.4% but declined slightly year over year.