Adjusted earnings per share (barring one-time items) in the reported quarter were $2.16, beating the Zacks Consensus Estimate of $2.09.

Revenues rose around 15.7% year over year to $1,176 million in the quarter. However, the top line missed the Zacks Consensus Estimate of $1,178.7 million.

Adjusted EBITDA in the reported quarter surged 39.3% year over year to $337 million.

The average realized price for methanol was $425 per ton in the quarter, up roughly 17.1% from $363 per ton in the prior-year quarter. In the first quarter, the company enjoyed strong industry conditions. Methanex’s impressive financial performance enabled it to return excess cash to shareholders through its raised dividend and increased share repurchase program.

Cash and cash equivalents increased around 31.4% year-over-year to $1,125 million at the end of the first quarter. The long-term debt at the end of the quarter was $2,144 million, down around 7% year over year.

Cash flow from operating activities was $325 million, up around 94.6% year over year. The company paid out dividends worth $9 million during the reported quarter.

Methanex forecasts production for 2022 to be roughly 1.5 million tons in New Zealand. It expects adequate gas to operate both Chile plants through April 2022. The company projects production in 2022 to be roughly 1 million tons in Chile. The construction of the Geismar 3 project is progressing according to plan and is on track to be completed on-time and within budget by late 2023 or early 2024.

Shares of Methanex have increased 31% in the past year against a 7.5% decline of the industry. 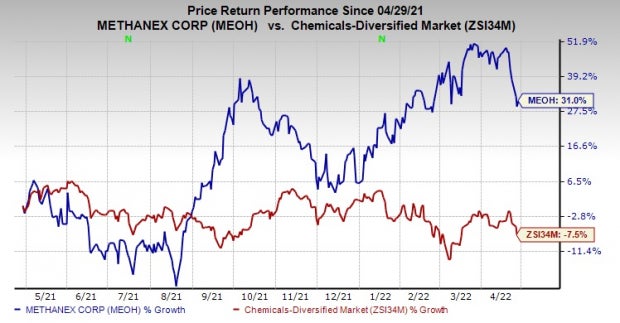 Mosaic has a projected earnings growth rate of 143.5% for the current year. The Zacks Consensus Estimate for MOS' current-year earnings has been revised 39.7% upward in the past 60 days.

Mosaic’s earnings beat the Zacks Consensus Estimate in three of the last four quarters, while missing once. It delivered a trailing four-quarter earnings surprise of roughly 3.7%, on average. MOS has rallied around 78.6% in a year and currently sports a Zacks Rank #1 (Strong Buy). You can see the complete list of today’s Zacks #1 Rank stocks here.

AdvanSix has a projected earnings growth rate of 54.7% for the current year. The Zacks Consensus Estimate for ASIX’s current-year earnings has been revised 43.6% upward in the past 60 days.

AdvanSix’s earnings beat the Zacks Consensus Estimate in three of the trailing four quarters, the average being 23.6%. ASIX has surged 47.3% in a year. The company sports a Zacks Rank #1.

Allegheny’s earnings beat the Zacks Consensus Estimate in each of the trailing four quarters, the average being 127.2%. ATI has rallied around 15.4% over a year.