Each of these five companies currently carries a Zacks Rank #3 (Hold). You can see the complete list of today’s Zacks #1 Rank (Strong Buy) stocks here.

General Motors reported first-quarter 2022 adjusted earnings of $2.09 per share, topping the Zacks Consensus Estimate of $1.56. Better-than-expected contributions from North America, International and Financial segments drove the outperformance. The bottom line, however, compares unfavorably with the year-ago quarter’s earnings of $2.25 per share. Revenues of $35,979 million missed the Zacks Consensus Estimate of $36,252.5 million. The top line compares favorably with the year-ago figure of $32,474 million.

Ford reported adjusted earnings of 38 cents per share in first-quarter 2022, missing the Zacks Consensus Estimate of 39 cents. Lower-than-expected profits in North America and a wider-than-expected pretax loss in China led to this underperformance.  The bottom line compares unfavorably with the year-ago quarter’s earnings of 89 cents. The company’s consolidated first-quarter revenues came in at $34.5 billion, down 4.9% year over year.In the first quarter, the total revenues from the automotive business declined 4% to $32.1 billion and missed the Zacks Consensus Estimate of $39.1 billion.

PACCAR reported earnings of $1.72 per share in first-quarter 2022, topping the Zacks Consensus Estimate of $1.51 and rising from the year-ago figure of $1.35. Higher-than-expected revenues across all segments resulted in the outperformance. Consolidated revenues (including trucks and financial services) came in at $6,472.6 million, up from $5,845.5 million recorded in the corresponding quarter of 2021. Sales from Trucks, Parts and Others were $6,106.4 million, beating the consensus mark of $5,781 million.

LKQ reported adjusted earnings of $1 per share in first-quarter 2022, surpassing the Zacks Consensus Estimate of 91 cents and increasing 6.4% year over year from 94 cents. This outperformance was driven by the higher-than-anticipated revenues from the North American and European segments. LKQ registered quarterly revenues of $3,348 million, beating the Zacks Consensus Estimate of $3,279.7 million. In addition, the top line climbed 5.6% from the year-ago level of $3,170.8 million. The parts and services organic revenues also increased 6.9% year over year.

O’Reilly reported first-quarter 2022 adjusted earnings per share of $7.17, missing the Zacks Consensus Estimate of $7.43. The bottom line, however, increased from $7.06 a share recorded in the prior-year quarter. This automotive parts retailer registered quarterly revenues of $3,296 million, beating the consensus mark of $3,283.3 million. The top line was also 6.6% higher than the prior-year figure of $3,090.9 million. Comps grew 4.8% year over year, topping the Zacks Consensus Estimate of 4.17%. 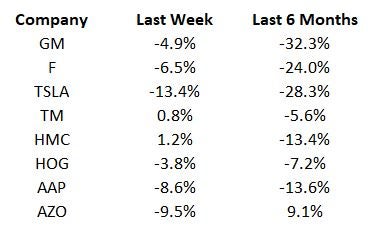 Stay tuned for quarterly results of a host of auto companies that are slated to report this week.Also, watch out for any update on how automakers will tackle the semiconductor shortage —aggravated by the Russia-Ukraine war and rising COVID-19 infections— and make changes in business operations.

fuboTV (FUBO) to Report Q1 Earnings: What's in the Cards?