Esperion Therapeutics, Inc. (ESPR - Free Report) incurred a loss per share of 93 cents per share for the first quarter of 2022, narrower than the Zacks Consensus Estimate of a loss of 96 cents per share. The company had recorded a loss of $3.50 per share in the year-ago period. Robust sales growth of its approved drugs in the U.S. as well as ex-U.S. markets led to the narrower year-over-year loss. The company also achieved year-over-year cost savings of 32% in operational expenses.

The company generated revenues of $18.8 million, up almost 135% year over year. Revenues also beat the Zacks Consensus Estimate of $15.53 million.

Shares of Esperion rose 13.9% on May 3, following better-than-expected quarterly results. In fact, Esperion’s stock has gained 30.6% so far this year against the industry’s 21.9% decrease. 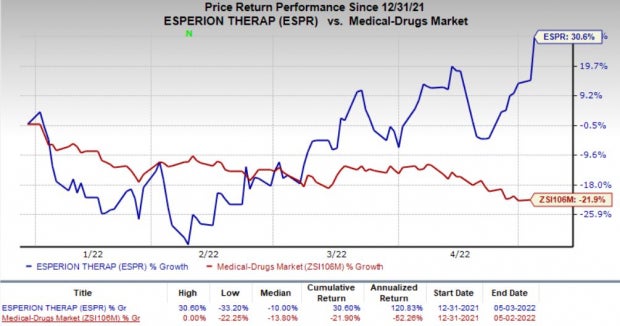 Esperion has two FDA-approved drugs — Nexletol and Nexlizet — in its commercial portfolio approved for treating elevated LDL-C (bad cholesterol). These two drugs are marketed as Nilemdo and Nustendi in Europe and several other ex-U.S. markets in partnership with Daiichi Sankyo. Esperion records royalty on sales of its drugs in Europe.

Product revenues, solely from the United States, were $13.4 million in the first quarter, up approximately 109% year over year. Product revenues were up 9.8% sequentially.

The company recorded royalty revenues of $1.1 million during the reported quarter, compared with $0.6 million in the year-ago quarter. Royalty revenues were driven by the continued rollout of Nilemdo and Nustendi in European countries as well as growth in previously launched territories.

Research and development (R&D) expense decreased 13.2% from the year-ago period to $24.3 million due to a decline in alternative supply manufacturing and compensation costs.

Selling, general and administrative expenses (SG&A) were down 50.2% year over year to $30.4 million, reflecting the positive impact of its cost-savings programs as part of its transformational plan announced in the fourth quarter of 2021. The year-ago quarter also included an one-time legal settlement charge of $13.3 million.

Esperion is evaluating bempedoic acid, a key ingredient of its drugs, for its effects on the occurrence of major cardiovascular events in patients with, or at high risk for, cardiovascular disease and are ineligible for the lowest approved statin dose. The company is expected to report top-line data from the cardiovascular outcomes study in the first quarter of 2023.

Positive data from the study is likely to boost the potential of Esperion’s drugs as the targeted patient population represents a lucrative opportunity.

Xencor delivered an earnings surprise of 125.72%, on average, in the last four quarters.

Exscientia delivered a negative earnings surprise of 298.22%, on average, in the last four quarters.

Lyell delivered an earnings surprise of 25.26%, on average, in the last four quarters.