The Case for Beaten-Down Tech Stocks

Day-trading is a high-risk game based on technicals, and people playing this game could be either fretting the slump in markets or making the most of the volatility. But real investors with a longer time horizon must have sold off their bad bets and collected the cash. And they may be ready to go shopping again. Those are the investors I’m talking to here.

Because we all know how things have gone over the past couple of years. We know how stimulus money flooded into the market, and how the pandemic boosted tech-supported infrastructure, with both factors driving up valuations in the technology sector. So we were more or less expecting a correction. But the supply chain turning out to be messier than expected and inflation running ahead of itself have made the situation a few degrees worse. And now we have the Fed coming in with reparations and everyone watching anxiously for when we slip into a recession.

And the fact is, things are bad. We are in for at least a year of pain. But what does that mean exactly? Just that chances are the market won’t let us make a whole lot of money during this time. But equally as surely, things will improve after that. So if you have a job, which is most likely, given that we are at full employment and the economy continues to open up, you can spend this time studying things and buying stocks that are temporarily out of favor.

This is essentially the technology story, although of course there are variations depending on the stock in question. These stocks may have been beaten down in recent months simply because they are building blocks of an infrastructure that has been built up at warp speed.

We probably don’t need more of the stuff right now. But these are things we can’t do without for any length of time. So demand will be back. And so will the prices. We just need to make sure we are buying cheap. And for the longer term.

So what is cheap? Cheap doesn’t mean a low dollar value (although it can be that as well). But cheap in this context refers to incremental price increases as it relates to incremental increases in earnings estimates. So a stock is cheap with respect to another when its price doesn’t increase quite as much as that other even when increases in estimates are same. It is captured in the price/earnings (P/E) metric.

It follows that when factors other than estimate changes beat down prices, the P/E value would fall. So this is what we should be in search of.

Of course, if these estimates start increasing while prices keep negative momentum, or recover at a slower rate, the P/E falls further. This is a state of disequilibrium which means prices are set to rise. It’s the best place to get into a stock.

This can be explained with the help of an example. So let’s take the case of Avnet, Inc. (AVT - Free Report) . This is a distributor of various technology products, mainly electronic components. In the last 4 weeks, the Zacks Consensus Estimate for Avnet’s earnings has increased by $1.16 (20.5%). The current-quarter (June) estimate increased 55 cents (39.0%). During the same time period, its shares appreciated just 9.4%.

So AVT shares are really cheap.

The Zacks Rank #1 (Strong Buy) and membership of the Electronics - Parts Distribution industry (top 17% of Zacks-classified industries) constitute the safety net, because the combination of a buy rank and belonging in the top 50% of industries is itself an indication of upside potential.

Now, moving on to Clearfield, Inc. (CLFD - Free Report) , which is a producer and seller of standard and custom passive connectivity products to the fiber-to-the-premises, enterprise, and original equipment manufacturer markets.

In the last 4 weeks, Clearfield’s earnings estimate has moved up 54 cents (24.2%) while the current-quarter estimate increased 21 cents (45.7%). During this time period, its shares dropped 17.8%. Additionally, its current P/E of 21.06X is trading close to its low point over the past year. This is slightly below the S&P 500 as well as the broader sector but well above the industry’s 13.94X.

So there’s no denying that Clearfield shares are trading cheap. The fact that it carries a Zacks Rank #1 and that it belongs to the Wireless Equipment industry (top 30%) are added positives.

United Microelectronics (UMC - Free Report) is also an attractive stock based on the numbers. The second largest semiconductor foundry in Taiwan, United Microelectronics is seeing extremely strong demand. Consequently, analysts have raised its current-year earnings estimate an average 14 cents (12.5%) in the last 30 days. The estimate for the current quarter is up 5 cents (17.8%). During the same time period, its shares have dropped 10.4%.

Additionally, United Microelectronics is currently trading at a 6.76X P/E, which is close to its low point over the past year. This is also well below the trading level of the S&P 500, the sector, as well as the industry to which the company belongs.

The Zacks Rank #2 (Buy) stock belongs to the Electronics – Semiconductors industry, which is in the bottom 42% of Zacks-classified industries.

So compared to the other two, United Microelectronics is slightly less attractive despite being really cheap at these levels. There is also a certain amount of geopolitical risk in owning the shares. 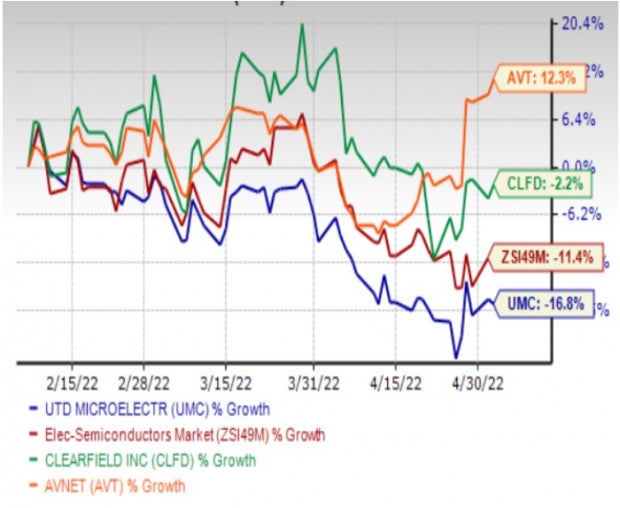