Barring one-time items, adjusted earnings were 91 cents per share for the quarter, down from $1.02 per share a year ago. It topped the Zacks Consensus Estimate of 84 cents.

Koppers recorded revenues of $459.3 million for the quarter, up around 13% year over year. Revenues surpassed the Zacks Consensus Estimate of $424 million. Lower sales from the Railroad and Utility Products and Services (“RUPS”) unit were more than offset by strong sales in Performance Chemicals (“PC”) and Carbon Materials and Chemicals (“CMC”) segments.

Sales from the RUPS segment fell around 4% year over year to $183.4 million in the reported quarter. Sales were impacted by a decline in volumes of utility poles in the United States and Australia, as well as reduced volumes of crossties for both Class I and commercial railroads.

The PC segment recorded sales of $136.4 million in the quarter, up around 10% year over year. Sales were driven by price hikes globally and increased demand for preservatives in South America.

Sales from the CMC division climbed around 52% year over year to $139.5 million. Sales were driven by increased prices and volumes for carbon pitch, phthalic anhydride and carbon black feedstock, as well as higher prices for naphthalene.

Koppers noted that it remains focused on expanding and optimizing its business and making progress toward its long-term financial goals.

The company also expects investments of roughly $95 million in capital expenditures this year.

Koppers’ shares are down 33.7% over a year compared with 7.1% decline recorded by the industry. 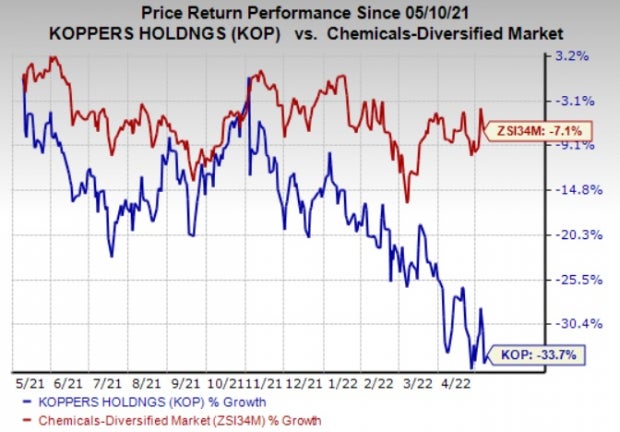 Steel Dynamics beat the Zacks Consensus Estimate for earnings in each of the last four quarters, the average being roughly 2.5%. STLD has gained around 21% in a year.

Commercial Metals beat the Zacks Consensus Estimate for earnings in three of the last four quarters while missed once. It has a trailing four-quarter earnings surprise of roughly 16%, on average. CMC has gained around 18% in a year.

AdvanSix beat the Zacks Consensus Estimate for earnings in three of the trailing four quarters while missed once. It has a trailing four-quarter earnings surprise of roughly 23.6%, on average. ASIX has rallied around 46% in a year.