Barring one-time items, adjusted earnings were 48 cents per share for the quarter. It topped the Zacks Consensus Estimate of 33 cents.

The company raked in revenues of $2,525 million for the quarter, up around 67% year over year. It surpassed the Zacks Consensus Estimate of $2,118.6 million.

The company’s performance was driven by higher demand and increased prices in most markets, offsetting higher overall costs and global supply chain challenges.

Revenues from the Industrial Products segment went up 24% year over year to a record $494 million in the reported quarter. The company saw higher year-over-year pricing while certain end-markets continued to moderate as supply chain and raw material supply issues along with higher costs continued to affect the global marketplace in the quarter.

The Potash unit logged revenues of $795 million, surging around 128% year over year. Average potash realized price per ton jumped 134% year-over-year, led by prices increases on the back of global disruptions in fertilizer availability, exacerbated by the Russia-Ukraine conflict.

Revenues from Phosphate Solutions rose 59% year over year to $798 million on record sales of Phosphate specialties and Phosphate commodities. Commodity market prices continued to trend higher along with raw material prices in the quarter.

The company ended the quarter with cash and cash equivalents of roughly $439 million, up roughly 180% the year-ago quarter. Long-term debt and debentures were $2,402 million, up 13% year over year.

The company raised its expectations for full year adjusted EBITDA to a range of $3,500-$3,750 million, with $1,300-$1,400 million coming from its specialties focused businesses. The revision is based on strong first-quarter results and significant changes in market dynamics.

ICL Group’s shares are up 65.4% over a year compared with a 21.5% decline recorded by the industry. 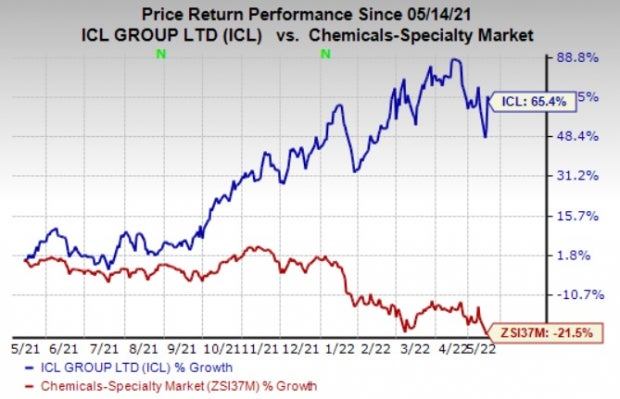 Steel Dynamics beat the Zacks Consensus Estimate for earnings in each of the last four quarters, the average being roughly 2.5%. STLD has gained around 17% in a year.

Commercial Metals beat the Zacks Consensus Estimate for earnings in three of the last four quarters while missed once. It has a trailing four-quarter earnings surprise of roughly 16%, on average. CMC has gained around 13% in a year.

Nutrien beat the Zacks Consensus Estimate for earnings in three of the last four quarters while missed once. It has a trailing four-quarter earnings surprise of roughly 5.8%, on average. NTR has rallied around 58% in a year.