The latest sell-off, following the one from last week wherein Ford sold 8 million shares for $214 million, has further pummeled RIVN’s stock. The recent sale has brought down Ford's stake in Rivian to just below 10%.

The Rivian initial public offering (IPO) was the largest in the year as investors eyed the EV startup that had promised to bring a boom in global EV sales. After the IPO, Rivian’s shares steadily increased, but from this year onward, the stock has suffered a steep fall as the company has strained to roll out its first models amid supply-chain bottlenecks. Other setbacks like supply-chain disruptions and issues curtailing production at its Normal, Ill. Plant have been contributing to the dismal performance of the stock.

At the time of Rivian's IPO in November 2021, Ford boasted a 12% stake in the company. F had invested $1.2 billion in the startup but reported a $3.1 billion net loss in the first quarter, led by a $5.4 billion loss on its investment. In the light of this, the company went ahead with the sell-off decision to gain lost income.

In the first quarter, Ford’s adjusted earnings came down to 38 cents per share from 89 cents in the year-ago quarter. The company’s consolidated first-quarter revenues came in at $34.5 billion, down 4.9% year over year.

Shares of Ford have lost 16.2% over the past year compared with its industry’s 49.3% decline. 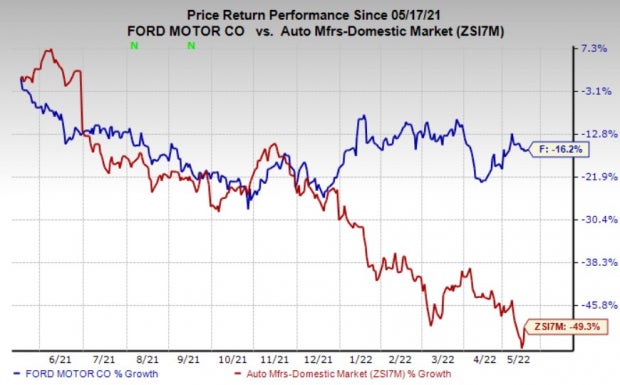 BRP Group has an expected earnings growth rate of 9.2% for fiscal 2023. The Zacks Consensus Estimate for current-year earnings has been revised around 7.2% upward in the past 60 days.

BRP Group’s earnings beat the Zacks Consensus Estimate in all of the trailing four quarters. DOOO pulled off a trailing four-quarter earnings surprise of 68%, on average. The stock has declined 4.9% over the past year.

Dorman Products’ earnings beat the Zacks Consensus Estimate in three of the trailing four quarters and missed in one. DORM pulled off a trailing four-quarter earnings surprise of 3.1%, on average. The stock has lost 0.7% over the past year.