Is The Bottom In Or Is It Just Another Dead Cat Bounce?

Fed Chair Powell called a bottom in 2022’s multiple-compression correction at a WSJ conference on Tuesday (5/17) when he suggested that the public equity markets had already been priced for the aggressive monetary tightening measures the Fed is preparing for.

A stronger than expected retail sales report from April before the opening bell provided Jay Powell’s “soft-landing” monetary narrative (claiming that the healthy US economy can easily manage 2 additional 50-bps rate hikes) with ancillary support. April’s pricing pressures were easily brushed off by euphoric consumers who are thrilled for the first COVID-free summer since 2019 as the Roaring 20s we’ve all been waiting for officially kicks off.

Stagflation fears have been temporarily abated after Tuesday morning’s retail sales report revealed that excessive demand continues to be a significant price driver, with real retail sales (adjusted for inflation) growing by 0.6% in April (compared to the month prior).

April’s retail sales report provided us with a clearer picture of how the US consumer responds to the Fed’s initial monetary tightening measures, showing us that consumers are less worried about prices today than ever before.

Growing demand continues to be the primary inflationary driver, which reinforces the Fed’s increasingly hawkish positioning.

If inflation were occurring in the absence of demand, this would be a clear indicator of potential stagflation (low/negative GDP growth while inflation runs wild). However, April’s hotter than expected consumer spending (excluding volatile vehicles) illustrates just how healthy our flourishing economy continues to be.

The bulk of the consumer spending growth came from the rapidly reviving service spending with restaurants and bars now fully open, as well as new clothes to impress an open world like we haven’t seen in almost 3 years now, and of course, electronics continued to see outsized demand (which I expect to be a secular driver of consumer spending in the years to come).

This level of sustained economic growth gives me and the rest of the market a bit more faith in the Fed’s “soft-landing” target, demonstrating the continued health of the underlying consumer.

Real GDP growth for Q2 is now on track to come in positive, nullifying many of the market’s recessionary outlooks (2 quarters of negative real GDP growth, after the US economy’s -1.4% real contraction in Q1).

The Capitulation We’ve Been Waiting For?

The Nasdaq 100 plunged to its lowest level in 18-months in last Thursday’s intra-day action, but the clearly exhausted selling from already capitulated retail investors, drove the smart money back onto the bid in the final hours of Thursday trading, which ended pouring into Friday’s high-growth rocket-ship session.

High-growth innovators have been the public market’s punching bag since the year began, with short-sellers driving the most speculative equities (negative earnings & rich valuations) to the core of the earth.

Cathie Wood’s popularized Ark Innovation ETF (ARKK - Free Report) , a favorite among this young new class of market participants, perfectly depicts the indiscriminate nature of 2022’s high-growth drop-off. ARKK plunged an unprecedented -65% year-to-date at the over 2-year lows it reached on Thursday (5/12), which ended up being this “innovation-benchmark’s” highest volume day in its almost 8-year history, as savvy short-sellers double-bought the bottom to not just cover their negative position but go long (bought twice as much as they had shorted).

ARKK shot over 11.8% out of the egregiously oversold RSI levels it reached Thursday afternoon, in the week’s final trading session, which may just be this actively traded ETF’s best 1-day return ever. This is not surprising considering ARKK’s unprecedented valuation compression from a 55x price-to-sales multiple to less than 12x (its lowest aggregate P/S in over 2 years) in the 4.5 months since 2022, which is unheard of (typically, this type of share price decline would coincide with a big drop in sales estimates).

Deep-pocketed institutional players – who are privy to unique real-time market data and employ smart algorithmic/computer-programmed trading strategies to leverage it – have been utilizing behavioral trading techniques to take advantage of the emotion-driven retail trading community, positioning the recently democratized US market’s unparalleled tidal wave of new investors at the center of the action once more.

The Individual Investor Remains on The Wrong Side of Wall Street

The mass-market exodus from surrendering retail traders on Tuesday (5/10) and Wednesday (5/11) of this past week ($1.9 billion in net outflows over this 2-day panic dumping spree) signaled the capitulation that strategic short-sellers had been waiting for to reverse their market narratives (market capitulation from emotion-driven amateurs typically indicates exhausted selling pressures).

This occurred just one week after this novice group of market participants poured a record $2.6 billion (the largest 1-day inflow from retail investors ever) into the market last Thursday (5/5) following Fed Chair Powell’s market soothing words of economic resilience amid this period of aggressive monetary tightening. However, Wednesday (5/11) morning’s “hotter than expected” CPI growth depicting prolonged inflation had these already nervous “bag holders” running for the hills.

There was nothing coincidental about this counterintuitive action, as Wall Street’s finest continues to drive the narrative on the accurate predication that individual investors will continue to make emotion-fueled trading decisions (which unfortunately causes many to buy peaks and sell troughs).

Individual traders/investors had been attempting to call a bottom in this market for weeks now, as patient dip-buyers flooded into the market after each of the 3 dead cat bounces (false bottoms indicated in the chart below) 2022 has tempted investors with, which inevitably led to last Thursday’s market surrender and subsequent whiplash reversal. 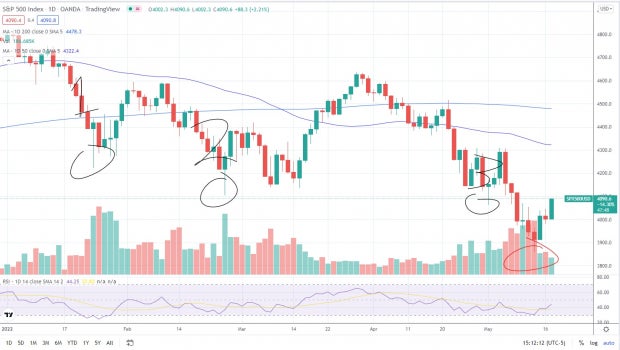 Individual market participants account for a larger share of the market’s action than at any prior point in history. However, retail investors are still at the mercy of Wall Street’s biggest and baddest trading groups, which are not only better informed but less emotionally driven than their retail counterparts.

The best (and really only) investing strategy that you can employ to avoid significant losses on these market fake-outs is by price averaging lower at each of the respective “false bottoms,” scaling into your favorite long-term positions at predetermined buy levels to ensure that you achieve the best longer-run returns.

The market’s preferred inflation gauge came in fiercer than expected this past Wednesday (5/11), with core CPI jumping 0.6% in April, which was more inflamed than economists’ 0.4% estimate. The 3-month inflation deceleration trend confirmation that investors were hoping for didn’t show up, and sellers once again took control of this increasingly illiquid market.

The headline CPI figure for April showed an 8.3% increase from last April, which was slightly lower than March’s 8.5% year-over-year increase as a result of marginally easing pressures at the pump, but there remains little evidence that core inflation has cooled.

Airfares saw an unprecedented 18.6% jump last month, marking its largest 1-month surge on record (dating back to 1963), as eager vacationers rushed to book their summer holidays the momentum of the federal mask mandate in the back half of April. This uptick in vacations may not last long though, as the market is now priced for a prolonged economic downturn.

Cathie Wood and her now infamous Ark Innovation ETF (ARKK - Free Report) have experienced a level of value decaying multiple compression as I’ve never seen before. ARKK, which had been hailed as the market’s innovation benchmark, after rallying nearly 400% in the 11-month bull run out of its pandemic slump, nearly retested its March 2020 lows last week, having lost over 75% of its value in the past 14 months.

Increasingly hawkish sentiment can be attributed to a large portion of Cathie Wood’s massive 2022 losses due to these holdings’ ultra-high-growth profile (value being driven by cash-flows that are years out), which makes them highly sensitive to interest rate moves. Not to mention the basketing effect that this fund’s popularity created, exemplified by Tuttle Capital’s perfectly timed Short ARKK ETF (ARKK - Free Report) , which is up 125% swelling daily volumes since it launched last November (compared to the 65% decline ARKK saw over that timeframe).

Despite the massive losses ARKK has sustained in 2022, retail investors have been flooding into this ETF with vigor, as $1.3 billion in net inflows pours into this ETF year-to-date with hopes of seeing some of Cathie’s long-term predictions (5 to 10 years out) come to fruition.

Cathie’s claim to fame was built on her longer-term innovation calls, namely her $4,000 per share Tesla (TSLA - Free Report) prediction back in April 2019 ($800 per share post-split), which represented a 1,500% upside at the time and miraculously came to fruition less than 2 years after she made her claim. The pandemic’s interest rate obliterating effect is why Cathie Wood has been estimated as an investment guru, but I am beginning to lose faith in her approach.

I had an enormous amount of confidence in the ETF prior to the pandemic, as it was full of exciting next-generation holdings that were still incredibly nascent and below most institutional investors’ radar. Unfortunately, the tidal wave of cash she had to deploy following the pandemic-powered retail investor revolution (who have a clear penchant for stocks of the future) has limited her investment scope to larger-cap equities due to an implicit ownership cap of around 10% (the insignificance of investments in any company worth less than $5 billion is clearly depicted in her portfolio).

The fund is almost certainly undervalued today (showed by the record 11.8% daily pump on Friday), but I am losing faith in her longer-term ability to uncover those hidden “market disruptors” with Tesla (TSLA - Free Report) , Zoom (ZM - Free Report) , and Roku (ROKU - Free Report) , now the 3 largest holdings. ARKK's biggest drivers no longer carry the “under-the-radar” growth-fueled value qualities that I had esteemed Wood for prior to the pandemic.

The best inflation protection and all-around best place to invest in this environment is the recently compressed innovation space (looking for companies driving secular positive free cash flow narratives). Wall Street’s leading digitizers will grow in the face of any economic climate as these market disruptors prove to be an indispensable competitive necessity as the Roaring 20s commence.