Adobe (ADBE - Free Report) might not occupy the same part of the technology stratosphere as Apple, Microsoft, and a few others. Still, the creative and design software powerhouse that went public in the mid-1980 makes a compelling case for the best of the rest when it comes to blue-chip tech stocks.

Adobe is starting to reach levels that should attract long-term investors looking to buy strong stocks to hold for the next several years or more.

Adobe’s portfolio of subscription-based software includes Photoshop, Premiere Pro, InDesign, Illustrator, and many others for a total of over 20 unique software offerings. The company’s products help users edit videos and images, create artwork and books, and do almost anything else in the larger creative/design world that one might imagine can be done on a computer, tablet, or smartphone.

Adobe’s Premiere Pro software has been the industry standard in video and film editing for decades, used to edit Hollywood movies and student films alike. The company has introduced slimmed-down versions of some of its software geared more toward shorter content and faster turnaround times for the social media age.

Adobe introduced its subscription model for all of its offerings about a decade ago, as well as a bundle package. And the offering is hardly cheap, with Creative Cloud running $54.99 per month for individuals. Adobe also sells various packages geared toward businesses, schools, and more.

Adobe’s 2021 sales climbed 23% to $16 billion to extend its streak of 15% or higher revenue growth to seven years. The nearby chart showcases the impact that ADBE’s switch to its current monthly/yearly subscription model back in 2012 has had on sales and consistency.

Amid all of the rough guidance coming in across Wall Street, ADBE’s consensus FY22 and FY23 earnings estimates are only -0.80% lower since it released its Q1 results. And the software giant pretty much always beats bottom-line projections. Wall Street is also super high on Adobe, with 17 of the 20 brokerage recommendations Zacks has at “Strong Buys,” with the other three at “Holds.”

Adobe stock has soared 185% in the five years to outclimb the Zacks Technology sector’s 85%. Its impressive outperformance extends back over the past 20 years as well. ADBE has come under pressure since the Nasdaq peaked in the fall, with it now trading 45% below its records at around $395 per share.

Adobe’s price tag alone might also mean a stock split could be in its future, which is something Apple, Tesla, and many others have done to make their price per share more attainable to a wider array of investors.

On the valuation front, Adobe’s falling price, coupled with its strong earnings outlook, has the stock trading below its covid lows at 33.1X forward 12-month earnings. The nearby chart shows just how enticing ADBE’s P/E levels are looking, with it sitting right near its cheapest valuation over the past 10 years. 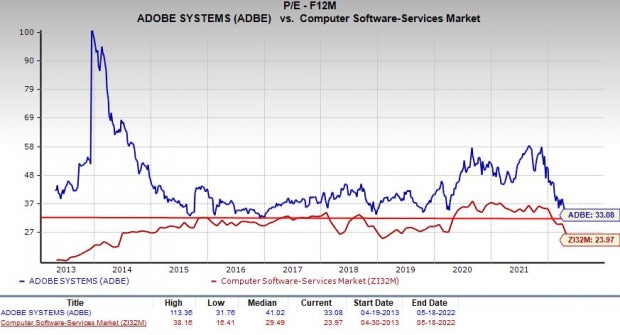 Adobe lands a Zacks Ranks #3 (Hold) at the moment alongside an “A” grade for Growth in our Style Scores system. Some investors might want to wait for Adobe to report its second quarter earnings results in June before they consider buying, given all of the recent post-earnings tumbles and overall market turmoil.

Thankfully, those with long-term investment targets don’t need to time the market so precisely and they might decide it’s time to start a position in Adobe.