Cabot Corporation’s (CBT - Free Report) shares have gained 24.9% over the past six months. The company has also outperformed its industry’s decline of 3.8% over the same time frame. Moreover, it has topped the S&P 500’s 16.2% decline over the same period. 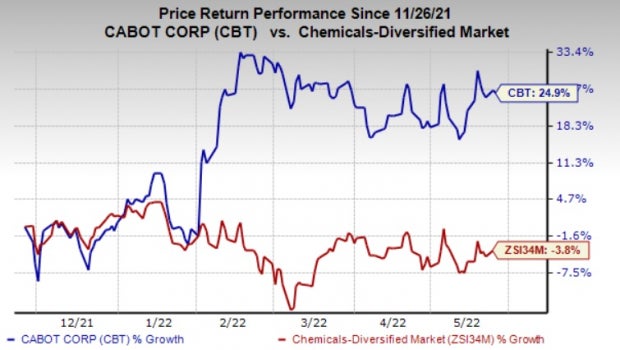 Factoring in its strong first-half results and expectations for the second half of fiscal 2022, Cabot raised its adjusted earnings per share outlook for the fiscal year by 30 cents at the midpoint to a new range of $5.80-$6.20.

Cabot is expected to gain from a recovery in demand from the pandemic-led slowdown, its disciplined execution of operations and targeted growth initiatives. The company is also well placed to benefit from its strategic acquisitions.

The acquisition of the Tokai Carbon Black Plant is expected to boost growth of the company’s Battery Materials product line. The buyout is in sync with Cabot’s strategy of executing growth opportunities in high-growth and high-performance markets such as battery materials. The investment will enable it to better meet the demand for lithium-ion batteries and run its operations responsibly such that they reduce the environmental impact.

The company is also benefiting from strong underlying demand across its businesses. Higher volumes and favorable pricing are driving results in its Reinforcement Materials segment. The company expects volumes to increase sequentially in the fiscal third quarter, driven by growth in Battery Materials applications.

Earnings estimates for Cabot have also been going up over the past two months. The Zacks Consensus Estimate for fiscal 2022 has increased around 5.2%. The consensus estimate for the fiscal third quarter has also been revised 3.3% upward over the same time frame. The favorable estimate revisions instill investor confidence in the stock.

Commercial Metals, carrying a Zacks Rank #1, has a projected earnings growth rate of 78.2% for the current fiscal year. The Zacks Consensus Estimate for CMC's current fiscal year earnings has been revised 31.9% upward over the past 60 days. You can see the complete list of today’s Zacks #1 Rank stocks here.

Commercial Metals beat the Zacks Consensus Estimate for earnings in three of the last four quarters while missed once. It has a trailing four-quarter earnings surprise of roughly 16%, on average. CMC has gained around 23% in a year.

Nutrien beat the Zacks Consensus Estimate for earnings in three of the last four quarters while missed once. It has a trailing four-quarter earnings surprise of roughly 5.8%, on average. NTR has rallied 63% in a year.

Albemarle’s earnings beat the Zacks Consensus Estimate in each of the trailing four quarters, the average being 22.5%. ALB has rallied roughly 50% in a year. The company flaunts a Zacks Rank #1.

What's in the Offing for Marvell (MRVL) This Earnings Season?