2 Great Stocks to Buy in June and Hold Forever

Stocks climbed Thursday as investors sort through more economic and earnings data, while continuing to weigh the likelihood of a recession. Wall Street appears to be breathing a slight sigh of relief that the Fed doesn’t plan to ramp up its tightening efforts beyond current market expectations.

Investors last week once again prevented the S&P 500 from closing a session down 20% or more from its peaks. The benchmark index is now up over 6% from its intraday lows on Friday, May 20 as it continues to find buyers after it found support at those bear market levels. Wall Street might now attempt to put an end to the S&P 500 and the Nasdaq’s seven-week slide that marked their worst losing streaks since 2001.

The market remains focused on an onslaught of headwinds that threaten to throw the U.S. and the global economies into a recession. Fresh Commerce Department data out Thursday said U.S. GDP slipped 1.5% in the first quarter, which was slightly worse than previously thought. This came after JPMorgan last week lowered its U.S. GDP forecast for the second half of the year and 2023, while Goldman Sachs trimmed its outlook for China.

The big retailers spooked Wall Street that higher prices across the entire economy would either continue to drag down margins or be passed onto consumers and eventually slow spending. Making matters worse are ongoing inventory issues and supply chain bottlenecks that aren’t set to subside anytime soon with zero-covid lockdowns in various parts of China still ongoing. Russian sanctions also continue to drive up oil and energy costs.

In this chaotic environment, the Fed is attempting to engineer a so-called soft landing for the U.S. economy. Trying to raise interest rates to pull down 40-year high inflation without helping push the economy into a recession won’t be easy.

Thankfully, stocks have already been significantly recalibrated, with many growth names and former covid high-flyers having lost more than two years’ worth of gains as investors price in rising interest rates—Cathie Wood’s ARK Innovation ETF is the perfect example. And it’s not just growth stocks, with the S&P 500 now trading around its March 2021 levels.

Wall Street is still trying to figure out how much more of a beating the market can take and the eventual market bottom can often only be located in retrospect.

Therefore, despite all of the fears and unknowns, investors with long-term outlooks should likely consider buying strong stocks at discounts heading into June and holding them for years. Today, we explore two stocks that are key cogs within the broader economy. 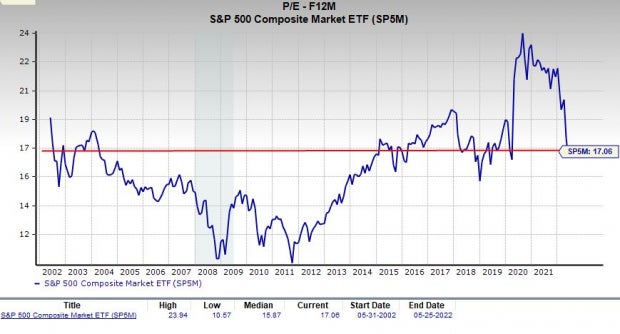 Micron is a global memory chip powerhouse, with its offerings found everywhere from PCs to smartphones. Historically, the memory side of the semiconductor market has been impacted greatly by pricing, which has tended to make Micron more cyclical than the larger chip space.

Micron’s days of trading more like a commodity might not last forever as its portfolio benefits from expansion into other secular growth areas such as data centers, connected vehicles, and artificial intelligence.

MU has topped our bottom-line estimates in every quarter but one in the past five years. And its FY22 and FY23 consensus estimates have climbed recently, even as many companies across the economy lower their guidance. 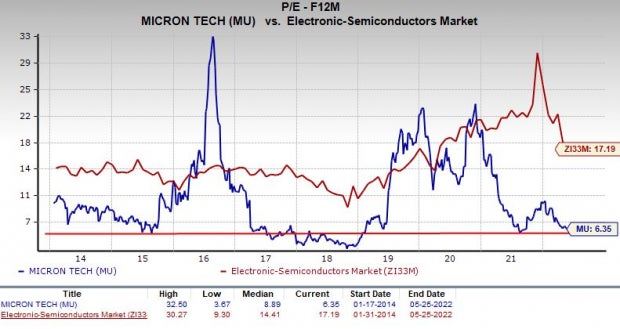 Semiconductors are the backbone of the digital-driven global economy and Micron shares have doubled the Zacks semiconductor market over the last 10 years and outpaced Technology as a whole, up 1,200% vs. 300%. MU is down in 2022 and it currently trades 27% below its records. Plus, Micron’s Zacks consensus prices target represents nearly 50% upside to its current $71 a share price tag.

The pullback and its strong earnings outlook, helps Micron trade near its three-year lows at 6.3X forward 12-month earnings. This also marks a 63% discount to the chip sector and 75% value compared to its own highs during the past few years.

Micron’s strong balance sheet will also help it continue to invest in growth and return value to shareholders through buybacks and dividends. No wonder 14 of the 16 brokerage recommendations Zacks has for Micron are “Strong Buys.”

Mastercard is a consumer and business credit card powerhouse that operates an elaborate backend processing network. MA is diversifying beyond traditional credit cards in order to become a global payments and fintech player built for our dynamic digital finance environment.

Mastercard’s newer efforts include buy now, pay later offerings, as well as cryptocurrency-focused acquisitions, and other purchases focused on the future. And Mastercard, alongside Visa, is raising the interchange fees that merchants pay for accepting credit cards.

Mastercard crushed our first quarter earnings estimate by 27% at the end of April. The strong showing was driven by its cross-border segment for the second period in a row. MA executives said that its travel-focused segment was stronger than it projected and above 2019 levels for the first time since the pandemic began.

Mastercard’s 2021 revenue surged 23% to outpace its pre-pandemic totals by $2 billion. Meanwhile, its adjusted FY21 earnings climbed 31%. Despite slowing economic growth, consumer spending remains strong, which is reflected in its outlook. Zacks estimates call for 17% sales expansion both this year and next to see MA pull in $26 billion in 2023. Mastercard’s adjusted EPS are expected to climb 25% this year and another 20% in 2023.

Mastercard raised its quarterly dividend by 11% and MA’s board authorized an additional $8 billion share repurchase program last fall. Mastercard currently lands a Zacks Rank #3 (Hold) and 15 of the 20 brokerage recommendations Zacks has are “Strong Buys” with two more “Buys,” and only one below a “Hold.”

Some investors might be a little nervous about buying a credit card stock with the possibility of a recession on the horizon. But if you have any confidence in the long-term economic growth in the U.S. and beyond, Mastercard is certainly a stock to own, especially as cash falls further out of favor.

At roughly $350 per share, Mastercard trades 13% below its records and its current Zacks consensus price target represents 23% upside. The recent downturn has readjusted its valuation, with MA trading 35% below its own highs at 30.5X forward 12-month earnings and below its five-year median of 31.9X. In fact, Mastercard’s valuation is not too far above its decade-long median.

Buy Lululemon Stock at a Big Discount and Hold for Years?