Valued at $21.6 million, the contract is expected to be complete by August 2023. Per the deal, Lockheed Martin will provide industrial post-delivery availability support for LCS 27. The work related to the deal will be carried out in Marinette, WI.

The LCS Freedom-variant is a resilient, flexible warship, which has been designed to encounter the evolving missions of the U.S. Navy. Furthermore, LCS 27 is designed to conduct close-to-shore missions and constitutes an integral part of the Navy’s fleet.

Moreover, its capability to execute military missions efficiently can be gauged from its remarkable features. It boasts a flexibility feature that can be modified to integrate capabilities, including over-the-horizon missiles, advanced electronic warfare systems and decoys (Nulka), and also vertical launching systems or laser weapon systems.

Moreover, it appears to be well-equipped with technologically advanced arms and ammunitions. In this context, it is imperative to mention that it is armed with Rolling Airframe Missiles and a Mark 110 gun, with the capability of firing 220 rounds per minute. In the current environment of rising geopolitical threats and risks, the demand for such a combat ship with features that are well-suited for any military expedition tends to rise.

The ship, which was only launched in August 2021, is regarded as the future of the United States Ship Nantucket. LMT is already enjoying the strong demand for the ship from the U.S. Navy, which can be assessed from the delivery of 10 ships to the U.S. Navy after its launch, while six ships appear to have been in various stages of production.

Lockheed Martin being one of the prime contractors of navy combat ships may continue to witness an order inflow for LCS 27, including various other modification contracts. This, in turn, is likely to bolster the revenue generation prospects of the Rotary and Mission Systems business unit.

Globally, the recent invasion of Ukraine by Russia has intensified the need for modernizing and upgrading the defense landscape. Many nations have pledged to increase their defense spending to strengthen their warfare capabilities and deter any war situation.

To this end, America, being no exception, followed the same path and thus the U.S. fiscal 2023 Department of Defense budget request of $773 billion reflects an increase of 4.1% from the fiscal 2022 enacted amount. If approved, this is likely to usher a huge inflow of orders from the Pentagon for defense weapons and arsenals, including the combat ship.

Huntington Ingalls is known for specializing in manufacturing amphibious assault and expeditionary ships and provides more than 70% of ships for the U.S. Navy.

The Zacks Consensus Estimate for Huntington Ingalls’ 2022 earnings implies a growth rate of 16.4% from the prior-year reported figure. Shares of HII have appreciated 16.4% in the past six months.

General Dynamics' National Steel and Shipbuilding Company has an extensive history of designing, building and repairing ships for the U.S. government and commercial customers.

BAE Systems’ Maritime is also poised to benefit as it designs and manufactures naval ships and submarines as well as their state-of-the-art combat systems and equipment.The company also provides maintenance and modernization programs to support ships and equipment in service worldwide.

BAE Systems boasts a long-term earnings growth rate of 7.2%. The Zacks Consensus Estimate for BAESY's 2022 sales indicates growth of 35% from the prior-year reported figure. Shares of BAE Systems have appreciated 30.5% in the past year.

In the past year, shares of Lockheed Martin have rallied 17.2% against the industry’s declineof 42%. 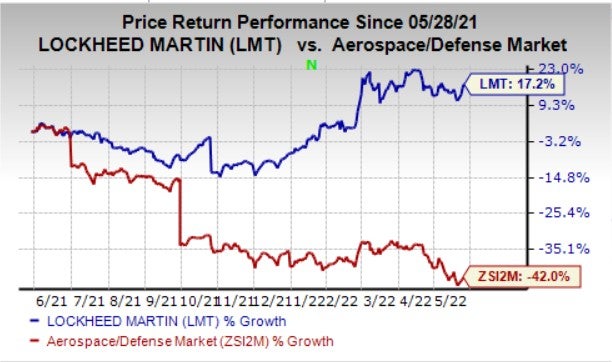