Live Nation (LYV) Outpaces Industry in the Past Year: Here's Why

Live Nation Entertainment, Inc. (LYV - Free Report) is benefiting from pent-up demand, OCESA buyout and Ticketmaster growth. Consequently, the company’s shares have gained 9.1% in the past year, against the industry’s decline of 39.8%. However, high costs and debt remain concerns.

With ramped-up vaccinations, live music events have returned in the second half of 2021. The company’s U.S. concerts are now fully open. Live Nation, which restarted its concert business in the second half of 2021, organized 17,000 concerts for 35 million fans in 2021, primarily in the United States and the U.K. markets. In the last five months of 2021, more than 15 million fans attended its outdoor events in the United States and the U.K. The company is witnessing robust demand for 2022 as well. For concerts, LYV announced that it has already sold more than 70 million tickets in 2022, up 36% from the comparable period in 2019. Concert bookings are up 44% through late April (vs. 2019). Live Nation Entertainment believes several of its artists like Dave Matthews, Luke Bryan, Maroon 5, Travis Scott, Garth Brooks, among others, will have multi-year tours across the United States and Europe. This, in turn, will drive the company’s performance.

The Zacks Rank #3 (Hold) company has completed the buyout of OCESA, a Mexican entertainment company in which broadcaster Televisa has a 40% stake. OCESA has a strong presence in Latin America. Prior to the pandemic, the company promoted more than 3,100 events for nearly 6 million fans across Mexico and Colombia. It has a strong business portfolio in ticketing, sponsorship, food & beverage, merchandise, and venue operation. The company has 13 premier venues across Mexico. During its first-quarter 2022 conference call, the company announced that it anticipates OCESA to report full-year results in line with 2019 as Mexico is fully active.

The coronavirus pandemic has acted as a boon for Ticketmaster. Demand for digital ticketing has increased as venues as well as artists are seeking contactless transactions due to the pandemic. Ticketmaster will benefit in 2022 from increased Live Nation concert ticket sales and additional sales from new clients. During third-quarter 2021, Ticketmaster witnessed its fourth-highest fee-bearing GTV quarter excluding refunds, driven by sports legs resuming and concert on-sales for 2022 ramping up. 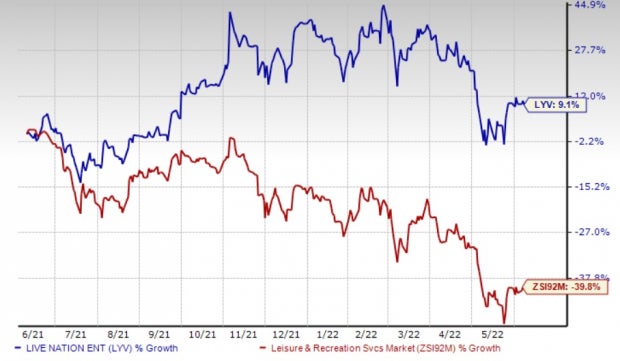 The company has been witnessing cost increases due to a rise in labor costs, supply chain challenges and inflation. It anticipates variable costs per fan, excluding talent, to increase 7% in 2022. An increase in costs is likely to hurt the company’s bottom line.

Civeo sports a Zacks Rank #1 (Strong Buy) at present. The company has a trailing four-quarter earnings surprise of 1,565.1%, on average. Shares of the company have soared 77.7% in the past year. You can see the complete list of today’s Zacks #1 Rank stocks here.

The Zacks Consensus Estimate for CVEO’s 2022 sales and earnings per share (EPS) suggests growth of 12.5% and 1,450%, respectively, from the year-ago period’s levels.

Bluegreen Vacations flaunts a Zacks Rank #2 (Buy). BVH has a trailing four-quarter earnings surprise of 85.9%, on average. The stock has surged 46.6% in the past year.

The Zacks Consensus Estimate for BVH’s current financial year sales and EPS indicates growth of 11.2% and 35.1%, respectively, from the year-ago period’s reported levels.

Funko carries a Zacks Rank #2. FNKO has a trailing four-quarter earnings surprise of 78.7%, on average. Shares of the company have declined 6% in the past year.

The Zacks Consensus Estimate for Funko’s current financial year sales and EPS suggests growth of 26.8% and 31%, respectively, from the year-ago period’s reported levels.