Molson Coors Beverage Company (TAP - Free Report) has been benefiting from the revitalization plan and the premiumization of its global portfolio. Strength across its Coors Light and Miller Lite brands, as well as the beyond beer approach, bodes well. These also aided the company’s performance in the first half of fiscal 2022.

In first-quarter 2022, Molson Coors’ earnings and sales surpassed the Zacks Consensus Estimate and improved year over year. This marked the fourth successive quarter of top-line growth for the company.

On a constant-currency (cc) basis, net sales rose 17.6% year over year. The company’s adjusted earnings of 29 cents per share grew significantly from a penny reported in the year-ago quarter. 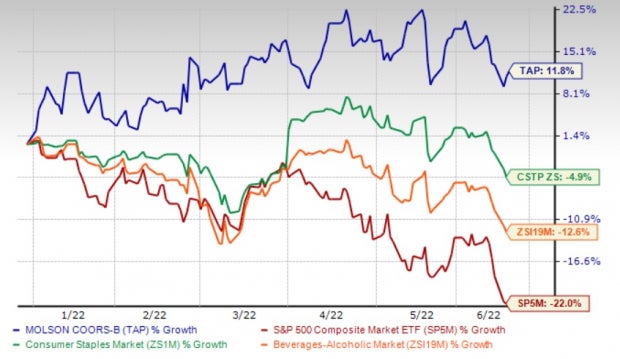 The Zacks Consensus Estimate for its current financial year’s sales suggests growth of 4.2% from the year-ago period’s reported number.

Molson Coors remains on track with increased investments toward core brands and innovations. The company is committed to growing its market share through innovation and premiumization. With a view to accelerating its portfolio premiumization, the company has been aggressively growing its above-premium portfolio for the past few years.

In first-quarter 2022, Molson Coors’ above-premium portfolio’s net sales grew more than 26% on a trailing 12-month basis. The U.S. above premium segment grew market share for five straight quarters. This growth was largely driven by the continued success of the U.S. hard seltzer portfolio, particularly the nationwide launch of Topo Chico Hard Seltzer, which is a key part of its “beyond beer” approach. The launch of the Margarita packs is likely to drive further growth for the brand. It also completed a capital project at the Fort Worth brewery in the first quarter, which is likely to help bring the U.S. Topo Chico Hard Seltzer production in house.

In Canada, the hard seltzer market has been witnessing continued momentum, driven by strength across Vizzy and Coors Seltzer. The introduction of Topo Chico Hard Seltzer to the Canada market is expected to boost growth.

Apart from the seltzer portfolio, above-premium beer remains a key growth driver. The company’s newly launched Praha, a relatively new pilsner from Staropramen, has been performing well in Central and Eastern Europe, and has now been launched in Romania.

In the reported quarter, the company’s Blue Moon and Peroni generated double-digit sales growth on the back of on-premise recovery and the continued momentum in the off-premise channel. Going ahead, management remains on track with the launch of Simply Spiked Lemonade in the United States. This is likely to drive its emerging growth division to become a $1-billion business in revenue terms by 2023.

Molson Coors is on track with its revitalization plan focused on achieving sustainable top-line growth by streamlining the organization and reinvesting resources into its brands and capabilities. The company intends to invest in iconic brands and growth opportunities in the above-premium beer space, expand in adjacencies and beyond beer without hampering the support for its existing large brands, and create digital competencies for commercial functions, supply-chain-related system capabilities and employees. To facilitate these investments, it plans to generate savings of $150 million by simplifying its structure.

The company is also building on the strength of its iconic core brands. Additionally, its cost-saving program announced in 2020 targets $600 million over three years.

Management retained its upbeat view for 2022 following the first-quarter results. Molson Coors expects net sales to grow in the mid-single digits at constant currency in 2022. Underlying EBITDA is likely to grow year over year in the high-single digits at cc. Underlying depreciation and amortization are projected to be $750 million. The company expects an underlying effective tax rate of 22-24%. Consolidated net interest expenses are anticipated to be $265 million, plus or minus 5%.

Headwinds in the Path

This was somewhat offset by the positive impacts of foreign currency, favorable changes to its unrealized mark-to-market commodity positions and reduced depreciation expenses. Also, underlying COGS per hectoliter rose 8.6% in constant currency. Inflationary pressures related to higher transportation and packaging materials costs are expected to continue in 2022.

Marketing investments in core brands and the latest innovations, as the coronavirus pandemic-led restrictions have been easing, continue to result in higher marketing, general & administrative expenses. The company increased marketing investments in the first quarter as planned, which was above the first-quarter 2019 levels. Management expects a year-over-year double-digit rise in marketing spend for the second quarter.

The Zacks Consensus Estimate for Coca-Cola’s sales and EPS for the current financial year suggests growth of 8.9% and 6.5%, respectively, from the year-ago reported levels. KO has a trailing four-quarter earnings surprise of 13.6%, on average. It has an expected long-term earnings growth rate of 7%.

Fomento Economico Mexicano, alias FEMSA, has exposure in various industries, including beverage, beer and retail, which gives it an edge over its competitors. It presently has a Zacks Rank of 2. FEMSA has a trailing four-quarter earnings surprise of 3.9%, on average. Shares of FMX have declined 10% year to date.

The Zacks Consensus Estimate for FEMSA’s sales for the current financial year suggests growth of 7.2% from the year-ago period’s reported figure. The same for earnings per share suggests a fall of 5.6%. FMX has an expected EPS growth rate of 8.8% for three to five years.

Duckhorn Portfolio currently has a Zacks Rank #2. The company has an expected long-term earnings growth rate of 12.2%. Shares of NAPA have declined 15.7% year to date.

The Zacks Consensus Estimate for Duckhorn Portfolio's current financial year’s earnings per share has moved up 3.3% in the past 30 days. The Zacks Consensus Estimate for NAPA’s sales and EPS for the current financial year suggests growth of 10.8% and 6.9%, respectively, from the year-ago reported levels. NAPA has a trailing four-quarter earnings surprise of 94.4%, on average.

Here's Why You Should Retain Kimco Realty (KIM) Stock Now