Here's Why You Should Retain Inari Medical (NARI) Stock Now

Inari Medical, Inc. (NARI - Free Report) is well-poised for growth, backed by its commitment toward understanding the venous system and a huge market opportunity for products. However, dependency on the broad adoption of products is a concern.

NARI — with a market capitalization of $3.37 billion — is a commercial-stage medical device company that seeks to develop products to treat and change the lives of patients suffering from venous diseases. The company’s earnings yield of (1.4%) is narrower than the industry’s (8.2%). It beat earnings estimates in two of the trailing four quarters, missed once and matched in another quarter, with the average surprise being 12.1%.

Inari Medical is spearheading the creation and commercialization of devices that are purposefully built keeping in mind the specific characteristics of the venous system, its diseases and its unique clot morphology. The company’s commitment toward understanding the venous system and in-depth knowledge of its target market has allowed it to figure out the unmet needs of its patients and physicians. This, in turn, has enabled NARI to quickly innovate and improve its products while informing its clinical and educational programs. 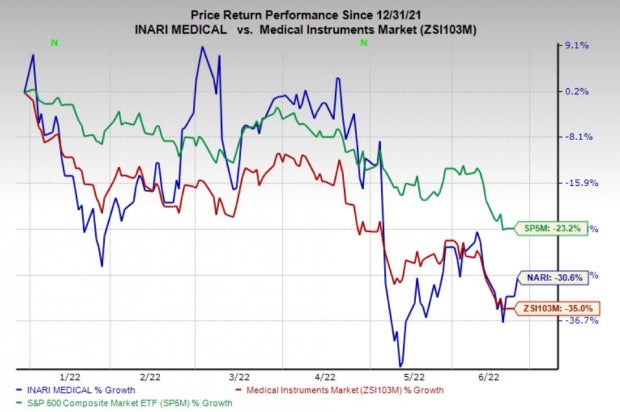 Inari Medical projects that a significant percentage of DVT and PE patients are treated with conservative medical management that involves anticoagulants alone, which does not break down or remove an existing clot. Consequently, the company believes that there is a huge untapped demand for safe and effective treatment and removal of the existing clot in patients with these diseases.

Per the first-quarter 2022 earnings call, the company received FDA clearance for Artix in March. This product is a peripheral thrombectomy device developed to cater to unmet needs in a new patient population. It is the first component of a broader toolbox that the company is in the process of developing. Per the fourth-quarter 2021 earnings call, the company completed its limited market release on ClotTriever Bold and moved to full market release. Bold is a more aggressive version of the company’s original ClotTriever device.

What’s Weighing on the Stock?

Most of Inari Medical’s product sales and revenues come from a limited number of hospitals. The company’s growth and profitability mainly depend on its ability to boost physician and patient awareness of its products and how keen physicians and hospitals are to adopt its products and perform catheter-based thrombectomy procedures for the treatment of VTE (venous thromboembolism).

The company’s inability to show the benefits of its products and catheter-based thrombectomy procedures will lead to limited adoption of the same. It might not happen as quickly as expected, negatively impacting its business and financial condition.

For 2022, the Zacks Consensus Estimate for revenues is pegged at $360.1 million, indicating an improvement of 30% from the year-ago period’s reported figure. The same for the bottom line stands at a loss of 84 cents per share. It had reported adjusted earnings per share of 18 cents in the year-ago quarter.

AMN Healthcare surpassed earnings estimates in each of the trailing four quarters, the average surprise being 15.6%. The company currently sports a Zacks Rank #1 (Strong Buy). You can see the complete list of today’s Zacks #1 Rank stocks here.

AMN Healthcare’s long-term earnings growth rate is estimated at 1.1%. The company’s earnings yield of 11.4% compares favorably with the industry’s (0.8%).

Masimo beat earnings estimates in each of the trailing four quarters, the average surprise being 4.4%. The company currently carries a Zacks Rank #2 (Buy).

ShockWave Medical surpassed earnings estimates in each of the trailing four quarters, the average surprise being 189.9%. The company currently sports a Zacks Rank #1.

ShockWave Medical’s earnings growth rate for 2022 is estimated at 807.7%. The company’s earnings yield of 0.9% compares favorably with the industry’s (8%).