Inogen, Inc. (INGN - Free Report) is well poised for growth in the coming quarters, backed by its high prospects in the portable oxygen concentrator (“POC”) space. Solid performance in the first quarter of 2022 and a strong product portfolio also buoy optimism. Headwinds resulting from Medicare and foreign exchange fluctuations are major downsides.

The renowned provider of POCs has a market capitalization of $563.6 million. The company projects 72.6% growth for 2023 and expects to witness continued improvements in its business. Inogen surpassed the Zacks Consensus Estimates in three of the trailing four quarters and missed the same in one, delivering an earnings surprise of 134.1%, on average. 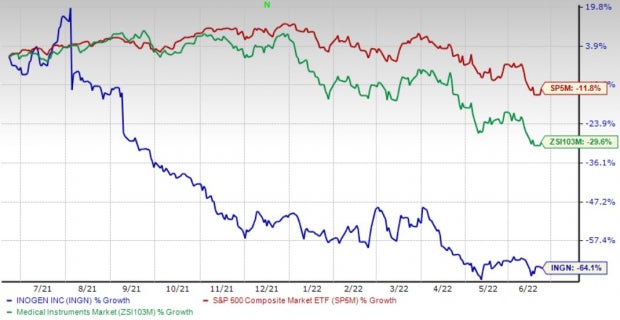 High Prospects in the POC Space: We are optimistic about the POCs’ superiority to conventional oxygen therapy (known as delivery model). POCs provide unlimited oxygen supply anywhere, thereby enhancing patient independence and mobility. Management at Inogen expects this to have an incremental positive impact on its industry and POC adoption.

Product Portfolio: We are optimistic about Inogen’s expanding product portfolio. The company provides oxygen concentrator solutions for portable and stationary use. Notable products offered by the company include Inogen One G5 in the domestic business-to-business and direct-to-consumer channels, besides the Inogen One G3 and One G4 POC. Inogen At Home is aptly formulated for patients who need oxygen therapy during sleep.

Management has confirmed Inogen’s plan of incorporating the Tidal Assist Ventilator directly into the Inogen One Portable Oxygen Concentrators and making the SideKick TAV product compatible with the Inogen At-Home Stationary Concentrator.

Medicare Headwinds: The Centers for Medicare & Medicaid Services has issued a final rule which requires Medicare prior authorization for certain durable medical equipment, prosthetics, orthotics and supplies that the agency characterizes as “frequently subject to unnecessary utilization.” If Inogen’s products are subject to prior authorization, it could reduce the number of patients qualified to come on service using their Medicare benefits. This could delay the start of treatment for such patients while the company waits for the prior authorization. It could also decrease sales productivity.

Forex Woes: Inogen generates a significant portion of its revenues from the international market. Management expects international revenues to remain lumpy owing to the timing and size of the distributor.  It also expects adverse foreign currency exchange rates to impede revenue growth in the near term owing to the strengthening of the U.S. dollar against the Euro and other foreign currencies.

Inogen has been witnessing a negative estimate revision trend for 2022. Over the past 90 days, the Zacks Consensus Estimate for its loss per share has widened from $1.11 to $1.53.

The Zacks Consensus Estimate for second-quarter 2022 revenues is pegged at $100.6 million, suggesting a 1% decline from the year-ago reported number.

AMN Healthcare, sporting a Zacks Rank #1 (Strong Buy) at present, has an estimated long-term growth rate of 1.1%. AMN’s earnings surpassed the Zacks Consensus Estimate in all the trailing four quarters, the average beat being 15.6%.

AMN Healthcare has gained 7.6% against the industry’s 54.2% fall in the past year.

Omnicell, carrying a Zacks Rank #2 (Buy) at present, has an estimated long-term growth rate of 20%. OMCL’s earnings surpassed estimates in three of the trailing four quarters and missed the same in the other, the average beat being 13.4%.

Masimo, carrying a Zacks Rank #2 at present, has an earnings yield of 3.6% against the industry’s negative yield. MASI’s earnings surpassed estimates in the trailing four quarters, the average beat being 4.4%.