Axsome Therapeutics (AXSM - Free Report) announced that it has received proposed labeling from the FDA for its lead pipeline candidate, AXS-05. The company’s new drug application (NDA) seeking approval for AXS-05 as a treatment for major depressive disorder (MDD) is under review with the FDA.

Axsome is currently reviewing the proposed label for AXS-05 by the FDA. The final labeling agreement for the candidate will be secured following a reply from the company.

In April, the company had received post-marketing requirements/commitments proposed by the FDA related to the NDA for AXS-05. The company has already agreed to the FDA’s proposal.

The labeling proposal for AXS-05 from the FDA following the post-marketing requirements/commitments proposal indicates the long-awaited potential approval for the candidate.

Investors were attracted to Axsome stock, driving it 51.4% higher on Monday following the positive regulatory update on AXS-05. The shares of Axsome have declined 2.7% so far this year compared with the industry’s decrease of 21.7%. 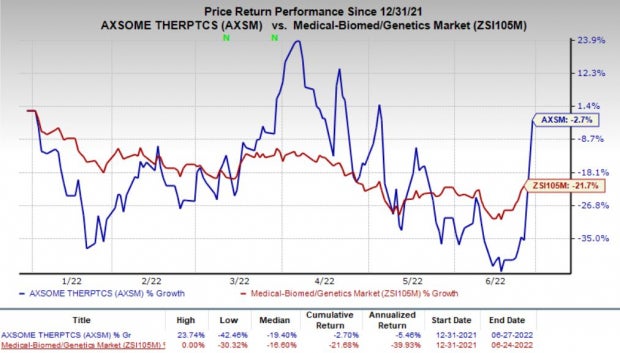 Although shares of Axsome are still in the red year to date, the share price has recovered since mid-June most likely on the back of potential approval for the first drug from the company’s pipeline.

Axsome’s NDA for AXS-05 faced a setback while under review with the FDA that led to a significant extension of the review period. The company had filed the NDA in 2021 that was accepted for priority review by the FDA. A decision was previously expected in August 2021. However, the FDA extended the review period for the NDA in August last year, citing deficiencies within the NDA that preclude labeling discussions, including deficiencies related to analytical methods in the chemistry, manufacturing, and controls (CMC) section of the NDA. The regulatory authority informed the company that it will not be able to take action related to the NDA until the deficiencies are addressed. The company submitted a response to these deficiencies in the fourth quarter of 2021.

Axsome has been actively engaged in preparing for the commercial launch of AXS-05, targeting MDD patients in the past few months regardless of the extension of the review timeline for its NDA. The company is also conducting a few label expansion studies for AXS-05.

The company had also filed an NDA for its another lead pipeline candidate, AXS-07, last year, seeking approval for the candidate as a potential acute treatment of migraine. However, the FDA issued a complete response letter in May, seeking additional CMC data related to drug product and the manufacturing process. The CRL did not raise any concerns about the clinical efficacy or safety issues of AXS-07 nor did the FDA request any new clinical study to support the approval of the candidate.

While AXSM believes that the FDA’s queries can be resolved, it intends to consult with the regulatory body before providing any timeline for refiling the NDA.

In a bid to strengthen its portfolio, Axsome signed an agreement with Jazz Pharmaceuticals (JAZZ - Free Report) in March to acquire the latter’s new sleep drug, Sunosi. The transaction is expected to be completed in the second quarter. Axsome will host a virtual event to provide investors with an update on Sunosi today.

Jazz received approval for Sunosi as a treatment to improve wakefulness and reduce excessive daytime sleepiness in adults with narcolepsy or obstructive sleep apnea. Jazz currently commercializes Sunosi in the United States, Europe and several other countries.

The Zacks Consensus Estimate for Alkermes’ 2022 loss per share has narrowed from 10 cents to 3 cents in the past 60 days. Shares of ALKS have risen 28% year to date.

The Zacks Consensus Estimate for Sesen Bio’s 2022 loss has narrowed from 46 cents to 44 cents per share in the past 60 days. Shares of SESN have gained 0.1% in the year-to-date period.