Whirlpool (WHR) to Incur Losses Due to Sale of Russia Business

Whirlpool Corporation’s (WHR - Free Report) subsidiary Whirlpool EMEA SpA is selling its Russian operations to Arçelik A.?? for $220 million. The sale will include the manufacturing site in Lipetsk, Russia, the sales organization in Moscow, and sales operations in Kazakhstan and other select Commonwealth of Independent States.

The deal transaction is likely to be concluded by the third quarter of 2022 and the deferred payment will take more than ten years to complete. Post the divestiture, Whirlpool will likely incur a loss of $300-$400 million in the second quarter of 2022.

The move comes following WHR’s decision to scale down its operations in Russia, as its invasion of Ukraine resulted in limited production. According to sources, foreign companies are accelerating their exit from Russia due to a new law, which is likely to allow Moscow to seize assets and impose criminal penalties.

In May, McDonald’s announced the sale of its Russia business to its existing licensee Alexander Govor.  Post the deal, Govor will operate the restaurants under a new brand. Current employees are likely to be retained for at least two years and the salaries of corporate employees of Russia will be funded by him until the deal closes.

The move is also expected to result in a non-cash charge of $1.2-$1.4 billion for MCD. The company already incurred a loss of $127 million in the first quarter of 2022.

Another retail giant exiting the Russia market following the invasion of Ukraine is Nike. In doing so, the company will not renew any of its franchise agreements with Russia. In March, Nike halted its online orders and shut down some stores.

However, the company’s non-franchised stores remain operational. Also, NKE extended its support to the existing employees in Russia during the exit process.

Treading a similar path, Cisco Systems revealed plans to shut down its business in Russia and Belarus in a phased manner. The company offered relocation options to its employees in Russia.

In March, the telecom giant temporarily suspended its operations in Russia due to the war in Ukraine. It also provided assistance to Ukrainian organizations to avoid cyber threats.

Coming back to Whirlpool, the company has been reeling under other headwinds, including global supply-chain disruptions and rising raw material costs. WHR expects the inefficiencies across the supply chain, particularly in distribution and labor, to continue. It also continues to monitor the global cost inflation, largely in steel and resins, which is likely to remain a headwind.

The company expects inflationary pressures to significantly impact the 2022 results. It anticipates net cost takeout to negatively impact margins by 250 bps in 2022, due to increased logistics and labor costs stemming from the Russia-Ukraine conflict. Management expects raw material inflation to hurt its margin by 700 bps and its business by $1.5-$1.75 billion in 2022, led by higher component and resin costs.

Consequently, management trimmed the view for 2022. This Zacks Rank #4 (Sell) company envisions net sales growth of 2-3%, down from the previously mentioned 5-6%. On a GAAP and ongoing basis, it expects earnings per share of $24-$26, lower than the $27-$29 stated earlier.

That said, the company has implemented cost takeout actions, including curtailing structural and discretionary costs, capturing raw material deflation opportunities, effectively managing working capital, and syncing supply chain and labor levels with demand. We hope that these cost savings and pricing measures will aid growth in the near term. 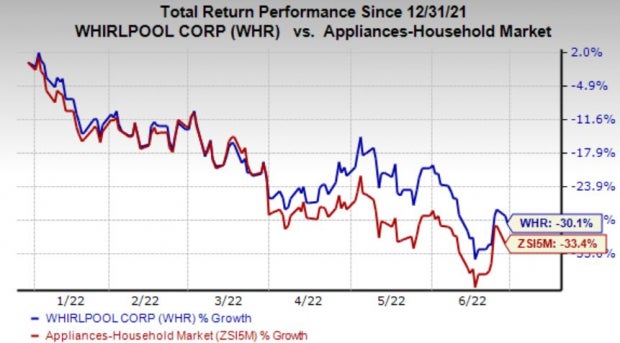