3 Reasons Why Microsoft Is a Stellar Long-Term Hold

It’s been a battlefield within the market year-to-date. Bears have seemingly pushed forward all year, forcing bulls to retreat. At every corner, they keep up their assault.

It’s been exhausting, to say the least. In a quick turn of events from previous years, tech stocks have tumbled, undoubtedly causing investors to feel the pain.

Supply chain and geopolitical issues have added fuel to the fire sale, but the spark was created earlier in the year whenever inflation had been reported to be at its highest levels in decades. Needing to act swiftly, the Fed opted to raise interest rates by levels not seen in years.

With the market pricing in the impact of the Fed’s actions, many once-beloved stocks have seen their valuations slashed by double-digit percentages throughout 2022. The chart below illustrates the performance of three heavy hitters in the tech space – Microsoft (MSFT - Free Report) , Apple (AAPL - Free Report) , and Alphabet (GOOGL - Free Report) – while blending in the S&P 500 as a benchmark.

As we can see, it’s been quite the rough stretch for all three companies. One company, in particular, Microsoft, still has plenty of room to grow. Let’s look at three reasons MSFT investors can sleep soundly at night.

Cloud computing is rapidly becoming a major highlight of modern technology, and nearly all companies want a piece of the pie. Fortunately, Microsoft has established itself in this realm with Azure, the company’s cloud computing services.

Azure is the only consistent hybrid cloud, delivering unparalleled developer productivity and comprehensive, multilayered security. Microsoft believes that cloud technology will be a critical growth driver of the world’s economic output and will extensively aid its top-line results in the future.

In its latest quarterly report, Microsoft Azure was a significant highlight. It reported better-than-expected commercial booking growth of 28%, and Azure Cloud revenue was $23.4 billion, up 32% year-over-year.

Currently, MSFT faces tough opposition from Amazon’s (AMZN - Free Report) AWS cloud platform – the largest in the world. However, Azure is now available globally in more than 60 regions, strengthening its foothold in the space.

The world was shut down during the early and mid-phases of the pandemic. We had to work, study, and communicate, all within a digital landscape. Being trapped inside, video games rapidly became a popular way to pass the time, spurring innovation and growth in the space – and companies soon took notice.

Back in January, Microsoft made a major splash, acquiring Activision Blizzard (ATVI - Free Report) for a whopping $68.7 billion. It was a massive deal that caught extensive attention – it ranks as the largest acquisition in the video game industry’s history.

Activision Blizzard is a leader in video game development and an interactive entertainment content publisher, most well-known for Call of Duty. MSFT already owns two massive video game titles, Halo – the company’s flagship video game, and Minecraft – the best-selling game of all time.

The company plans to publish all of ATVI’s video game titles onto its Xbox Game Pass, a unique gaming service that allows gamers unlimited access to a library of games for a flat rate of $9.99 per month.

Of course, any investor wants to see a company consistently increasing its top and bottom line, and that is precisely what Microsoft is forecasted to do. It’s one of the reasons that Microsoft has become a staple in many portfolios.

MSFT is forecasted to rake in a mighty $52.4 billion for the upcoming quarter, registering a double-digit quarterly revenue increase of 13.5% compared to the year-ago quarter. Looking ahead, the FY22 sales estimate of $198.5 billion reflects a substantial 18% expansion within the top line year-over-year.

The bottom line is forecasted to expand substantially as well. The $2.30 per share estimate for the upcoming quarter displays a notable 6% growth in earnings from the year-ago quarter, and the FY22 EPS estimate of $9.28 reflects a beautiful 18% expansion within the bottom line year-over-year.

Over the next three to five years, the bottom line is forecasted to expand by a notable 12%. 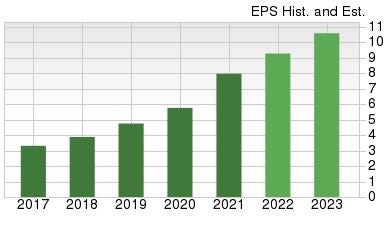 As we can see, Microsoft still has plenty of room for growth. A robust cloud computing service, a beefed-up gaming segment, and strong future growth prospects bode well for the company in the long term.

Of course, the price action throughout tech in 2022 is more than disheartening. However, it’s allowed us to buy shares at levels not seen in some time. Its current forward earnings multiple of 27.6X is nowhere near 2021 highs of 37.5X and is just below its five-year median value of 28.4X.

All in all, the future looks bright for Microsoft and its shareholders.