The company sold nearly 19,200 attributable GEOs in the quarter. This marks a 7% increase from 18,004 ounces GEOs sold in second-quarter 2021. The company generated preliminary revenues of $36 million in the quarter under discussion compared with the year-ago quarter's $26.4 million.

The preliminary cost of sales, excluding the depletion for the June-end quarter, was $5.3 million, which came in higher than $4.1 million reported in the second quarter of 2021. This led to cash operating margins of approximately $1,590 per attributable GEO in the quarter under review, higher than the prior-year quarter's $1,569 per GEO.

The second-quarter 2022 results built on the momentum of the strong performance in the first quarter. The company had reported record attributable GEOs of 18,741 ounces in the first quarter, exhibiting a 7% increase year on year. Revenues were $35.4 million. In 2021, Sandstorm Gold had sold approximately a record 67,548 attributable GEOs, up 29% from the prior year's levels. The figure came within the company's guidance of 64,000-69,000 ounces. The company delivered record revenues of $114.9 million for the year.

Per the company's guidance provided on May 11, attributable GEOs are expected between 80,000 and 85,000 for 2022. This is subject to the closing of the Nomad Acquisition (expected in the second half of this year) and BaseCore Transaction, which is anticipated to be completed in the third quarter. The company had mentioned that it is expecting attributable gold equivalent production to be more than 155,000 ounces in 2025, subject to the conversion of the HodMaden interest into a gold stream.

Sandstorm Gold is a gold royalty company that provides upfront financing to gold miners who are looking for capital. In return, the company receives the right to a percentage of the gold produced from a mine for the life of the mine. It currently boasts a portfolio of 25 royalties, of which 39 of the underlying mines are producing now. SAND plans to grow and diversify its low-cost production profile through the acquisition of additional gold royalties. 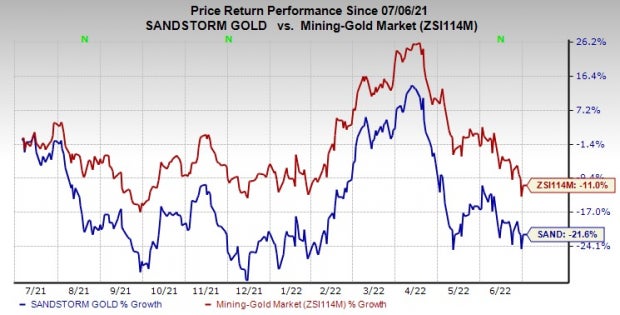 Sandstorm Gold's shares have fallen 21.6% in the past year compared with the industry's decline of 11%.

Albemarle has a projected earnings growth rate of 231.7% for the current year. The Zacks Consensus Estimate for ALB's current-year earnings has been revised 112.4% upward in the past 60 days. You can see the complete list of today's Zacks #1 Rank (Strong Buy) stocks here.

Albemarle's earnings beat the Zacks Consensus Estimate in each of the trailing four quarters, the average surprise being 20%. ALB has rallied roughly 22% in a year. The company flaunts a Zacks Rank #1.

Cabot's earnings beat the Zacks Consensus Estimate in each of the trailing four quarters, the average surprise being 16.2%. CBT has gained around 13% over a year.

Allegheny has a projected earnings growth rate of 1,076.9% for the current year. The Zacks Consensus Estimate for ATI's current-year earnings has been revised upward by 40.4% in the past 60 days.

Allegheny's earnings beat the Zacks Consensus Estimate in the last four quarters, the average surprise being 128.9%. ATI has gained around 10% in a year. It currently sports a Zacks Rank #1.

Here's Why You Should Retain McKesson (MCK) Stock Right Now