Tech stocks have been investors’ darlings in the last few years. And I’m not just talking about the race to digitization during the pandemic either. The trend is visible through the last ten-fifteen years at least.

Many of the mega-players and household names today actually assumed that status during this time. Of course, a number that were considered stalwarts back then are not considered that great today. And still others only exist today as part of the larger players that absorbed them. So this has been one of the most active of sectors.

The main thing that propelled tech companies to their position of preeminence is their ability to innovate. Companies of all kinds need to increase efficiency on their road to profit maximization. And technology is a great enabler. Therefore, as we take stock of the latest trends in the market, it makes sense to think about the best tech stocks.

Not much has changed since yesterday's 4th of July holiday: the Fed remains on course with its rate hikes, which basically makes it more expensive to run a business, which then raises prices in a way that turns consumers away, which eventually gets sellers to lower prices. That is how inflation is traditionally tackled.

But not every commodity can be turned away from. Oil, for instance, is holding steady at over $110, and that continues to fuel inflation. Therefore, there’s the concern that if things continue the way they are, merely dropping prices won’t help manufacturers. They would have to cut production as well, which would then send us into a recession.

Be that as it may, this is actually a good time to buy tech stocks, because you may be able to buy below intrinsic value. A large number of tech stocks are categorized as growth, i.e., you’re required to bet large sums on their future growth potential. In a bull market, that could turn into a lot of money -- as well as increase your risk.

But in a market such as this, investors tend to quickly pull their money out of risky bets, which means these same growth stocks are likely to be a good bit cheaper. And that is a perfect entry point.

But not all tech is the same. The platforms facilitating ecommerce, for example, have done great business in the last couple of years, but are likely to see difficult comps as well as increased competition from physical stores for the rest of this year. So there could very easily be further downside in share prices. Gaming and entertainment platforms may also report mixed quarters as consumers try to curtail spending because of the rising inflation and the Fed’s correction measures.

The server market is evolving, IDC says, “as server hardware profit pools continue to shift from capex to opex, from traditional core to cloud-enabled edge, and from the enterprise to the service provider." While this segment has been relatively more resilient than computing, it has its own share of challenges, mostly related to the supply chain. Pent-up demand is therefore expected to keep the market strong through 2023.

The auto market is also expected to shrink at a double-digit rate this year, as supply chain issues fall way short of demand.

As a result of the above, it may not be such a good idea to invest in the gadgets/products that use semiconductors, but focus instead on the all-important semiconductors themselves that, while being supply-constrained and slightly impacted by the war in Ukraine (for important components), remain in very high demand. Semiconductor manufacturers and those that provide key technologies to them are therefore equally good bets.

Here are a few examples. In addition to all the details I’ve provided below, all three are Strong Buy (Zacks #1 Rank) stocks.

There are a number of exciting things happening at Broadcom, which makes complex digital and mixed signal semiconductors and analog products.

The company has grown through a large number of strategic acquisitions. The latest is VMware, which is the leading enabler of virtualization and therefore of great strategic importance. It will hugely boost its software business, allowing it to offer mission-critical platform solutions to enterprises.

Management also stated that lead times appeared to be extending and channel inventories were lean. They explained how enterprises, service providers and hyperscalers were preferring Broadcom to proprietary offerings (an ongoing trend) and how broadband infrastructure (spending expected to be multi-year) were big drivers.

On the industrial side, strength was seen in electric vehicles, renewable energy, factory automation and healthcare. It expects semiconductor revenue growth of 31% in the ongoing quarter. Including software, growth is expected to reach 24%.

In the last quarter, Broadcom beat the Zacks Consensus Estimate by 4% and the average estimates for 2022 and 2023 also increased by about 4% each in the last 60 days. Analysts currently expect revenue and earnings growth of a respective 20% and 32% this year, followed by further growth in the next.

The fact that Broadcom trades at just 13.2X earnings (below the S&P’s 16.4X and its own median level of 18.4X) makes it an absolute steal.

Given the current strength in semiconductor demand, it isn’t hard to see why Nova would be an attractive play right now. But the company’s strength lies in its product breadth that allows it to address the increasing complexities of manufacturing ever-smaller semiconductor devices.

And the success of its offerings is evident in the growth it is seeing across geographies. While Taiwan, Korea and China are big markets where it continues to gain share, the growing demand for onshore manufacturing in Europe and the U.S., which has given rise to the EU Chip Act and the U.S CHIPS Act, only increase its opportunities.

Therefore, it isn’t surprising that the company continues to grow its backlog even while it remains on track to deliver around 50% growth this year. Nova continues to increase its production capacity in Israel, Germany and in the U.S. to cater to the strong demand it is seeing.

Nova is priced at 19.1X earnings, which looks a bit expensive with respect to the S&P 500, but the multiple remains below its median level of 29.9X over the past year.

Globalfoundries is a semiconductor foundry offering a broad range of semiconductor devices, as well as a range of wafer fabrication services and technologies.

About half of revenue comes from mobile devices, which grew 28% in the last quarter with increased demand for feature rich phones. Communications infrastructure and data center markets account for about 17% of revenue and grew 80% in the last quarter, driven by increases in shipments, average selling prices (ASPs) and better mix as data center ramped up and 5G infrastructure buildout continued.

Home and industrial IOT grew 55% and contributed another 17% and here too, Globalfoundries benefited from volume, pricing and mix. Auto grew 170% from a small base.

Design wins at both new and existing customers continues and its long-term customer agreement provides revenue visibility. As a result, capacity expansion plans continue with the new Singapore fab construction on target to install tools this quarter and ramp production in the first half of 2023.

Analyst estimates are also not far behind. After Globalfoundries beat the Zacks Consensus in the last quarter by 75%, the 2022 estimate jumped 21%. Revenues are expected to grow 21% this year while the loss per share of 5 cents in the last quarter grows to a profit of $2.30.

At 2.6X sales, the shares aren’t exactly cheap, but they are cheaper than the S&P 500, which trades at 3.3X sales. NVMI’s median level over the past year is also higher at 3.83X. So it may be worth considering. 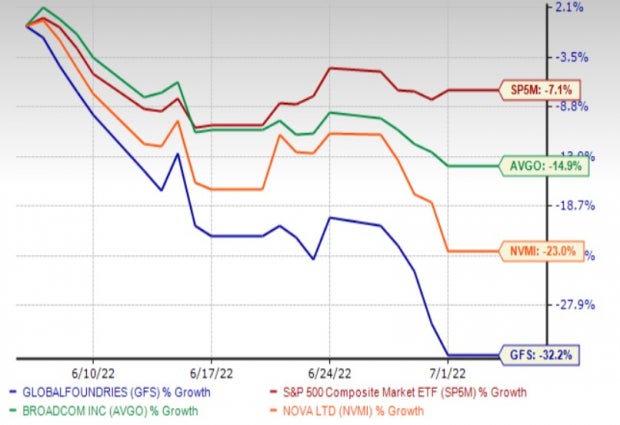