These 2 Tech Companies Have Made Significant Acquisitons in 2022

It goes without saying that it has been rough sailing in the market year-to-date. Headline after headline has shaken the market back and forth, and not in the way that we hoped.

When inflation was revealed to be at its highest level in decades earlier in the year, the Fed had to act swiftly, cranking interest rates in the hope of alleviating the issue. This monetary policy tightening, paired with geopolitical headlines, has massively soured investor sentiment.

Tech has been among the biggest losers in 2022 so far, a quick turnaround from what we’ve been used to over the last several years.

However, amid all the volatility and negativity, we have received positive announcements of acquisitions from a few titans in the tech space.

In addition, it’s absolutely critical that companies continuously adapt and change, as it’s never a good sign to see a company remain stagnant.

Below is a year-to-date chart of GOOGL and AMD shares, with the S&P 500 blended in as a benchmark. 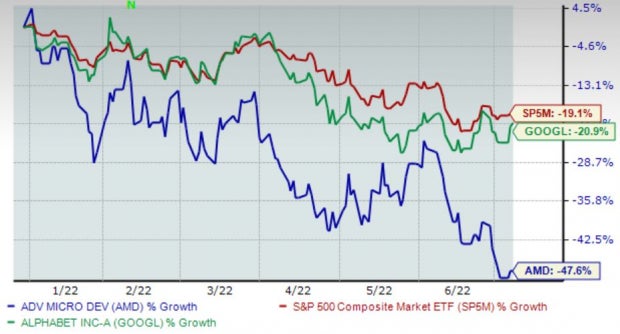 As we can see, it’s been a tough stretch for both of these companies.

The acquisition is for a simple reason – AMD is looking to boost its Data Center Solution capabilities. The deal was valued at $1.9 billion.

Pensando claims that its robust programmable packet processor provides up to 13x better performance than rivals’ similar products. Furthermore, its processor manipulates how workloads move through hardware infrastructure, bouncing tasks off the CPU whenever possible and considerably increasing efficiency.

Getting its hands on technology that surpasses its rivals, such as Nvidia (NVDA - Free Report) , is undoubtedly a significant plus.

AMD is currently a Zacks Rank #2 (Buy) with an overall VGM Score of a B.

For the upcoming quarter, AMD is forecasted to rake in $6.5 billion in revenue, resulting in a rock-solid double-digit 70% growth in revenue from year-ago quarterly sales of $3.9 billion. AMD has consistently reported strong top-line results, exceeding revenue expectations in ten consecutive quarters.

GOOGL’s cloud computing business has already been a significant success – Google Cloud raked in $6.4 billion in revenue in its latest earnings release, reflecting a sizable 41% growth from the year-ago quarter.

It is expected that pairing Mandiant’s strong cloud security with Alphabet’s cloud business will aid consumers globally, protecting them throughout all stages.

For the upcoming quarter, GOOGL is forecasted to rake in a mighty $58 billion in revenue, notching a strong double-digit 14% growth in sales from the year-ago quarter. Similar to AMD, Alphabet has primarily reported strong top-line results, exceeding quarterly revenue expectations in eight of its last ten reports.

Additionally, revenue is forecasted to climb 16% in FY22 and an additional 15% in FY23. 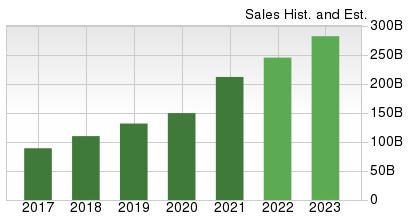 Acquisition news is always exciting in nature. After all, who doesn’t like to see one of their companies expand and push boundaries?

While tech has been a bloodbath year-to-date, these acquisitions give hope moving forward.

Nobody has a magic crystal ball that tells us where the market heads next, but we do know this – the rebound will be massive, and bears will undoubtedly go back into hibernation.

Until then, it’s beneficial to utilize a dollar-cost-averaging strategy and slowly build more prominent positions to reap the total rewards on the ride back up.