The company’s lead drug Ocaliva (OCA) is a farnesoid X receptor (“FXR”) agonist used for treating primary biliary cholangitis (PBC) in combination with ursodeoxycholic acid (UDCA) in adults who have not responded well enough to UDCA or alone for adults who cannot tolerate UDCA.

Ocaliva is currently approved in the United States, the United Kingdom, the European Union and several other jurisdictions for the treatment of PBC in adults.

In May 2022, Intercept entered into a series of agreements to sell its ex-U.S commercial operations, including foreign subsidiaries and sublicense the right to commercialize Ocaliva outside of the U.S to Advanz Pharma.

Per the deal, Intercept will receive $405 million upfront and an additional $45 million from Advanz Pharma, contingent upon receipt of extensions of orphan drug exclusivity from certain regulatory authorities in Europe. The acquisition was completed on Jul 1, 2022.

Shares of Intercept have plunged 6.2% so far this year compared with the industry’s 20.6% decline. 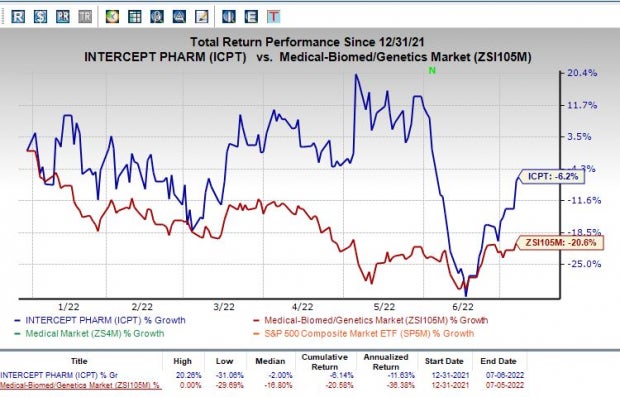 Intercept also develops OCA for additional indications, including nonalcoholic steatohepatitis (“NASH”). The FDA accepted its New Drug Application (NDA) for OCA, seeking accelerated approval for the treatment of fibrosis due to NASH in 2019.

However, in June 2020, Intercept received a complete response letter (CRL) from the FDA stating that NDA for obeticholic acid (OCA) for the treatment of liver fibrosis due to NASH could not be approved in its present form. This was a major setback for the company.

Per FDA’s guidance, Intercept decided to resubmit the NDA based on the phase III REGENERATE 18-month biopsy data, together with a safety assessment from its ongoing studies, in June 2022.

However, last month, Intercept announced a delay regarding the potential resubmission of its NDA for NASH treatment The resubmission is now set for July. Such pipeline setbacks remain an overhang on the shares.

Intercept continues to invest in evaluating the potential of OCA in progressive non-live diseases.

In addition, it also has other candidates in the early stages of research and development in its pipeline, including its FXR agonist, INT-787. INT-787 is currently being evaluated in a phase I study.