Horizon Therapeutics plc (HZNP - Free Report) announced that the FDA has approved its supplemental biologics license application (“BLA”) for combination use of its marketed drug, Krystexxa. The FDA has now approved Krystexxa injection plus methotrexate to help more people with uncontrolled gout achieve a complete response to therapy.

Krystexxa, until now, was approved as a monotherapy for the treatment of adult patients with chronic gout refractory to conventional therapies, also called uncontrolled gout.

The data also demonstrated a more than 30%-point increase in patient response rate during month six — 71% of patients who received treatment with Krystexxa plus methotrexate achieved the primary endpoint, which is defined as sUA<6 mg/dL, at least 80% of the time during month six.

No new safety concerns were identified from the study.

Shares of Horizon have lost 22.4% in the year so far compared with the industry’s decline of 18.3%. 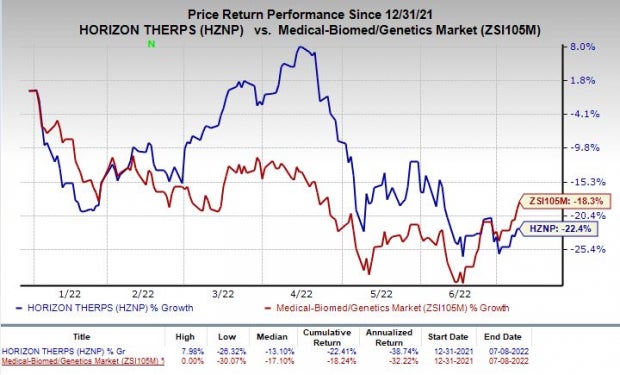 Per the company, immunomodulatory therapies like methotrexate are often used with biologic therapies to reduce the development of anti-drug antibodies. The latest approval for Krystexxa plus methotrexate will allow more physicians to recommend the combo to help people with uncontrolled gout.

In March 2022, the FDA granted priority review to the above-mentioned sBLA for Krystexxa. Horizon submitted the sBLA for the label expansion of Krystexxa to the FDA in January.

Krystexxa remains an important top-line driver for Horizon. The drug generated sales worth $140.7 million in the first quarter of 2022, reflecting an increase of 32% year over year. The label expansion of the drug in combination with methotrexate will make it eligible to serve a broader patient population and boost sales further in 2022 and beyond.

Earnings of Aptose Biosciences have surpassed estimates in three of the trailing four quarters and missed the same on the other occasion. APTO delivered an earnings surprise of 2.55%, on average.