IgAN, also known as Berger’s disease, is a serious condition that occurs when IgA deposits build up in the kidney, resulting in chronic kidney disease and renal failure.

IONIS-FB-LRx is an antisense drug developed using Ionis' advanced LIgand Conjugated Antisense (LICA) technology to reduce the production of complement factor B (FB), associated with the development of several complement-mediated diseases, including IgAN.

The decision to move forward with the phase III study was based on positive data from a phase II study of IONIS-FB-L Rx in IgAN, which showed that the candidate reduces complement and protein levels in the urine of patients with IgAN. The study met its primary endpoint of showing a change in 24-hour urinary protein after 29 weeks of treatment from baseline.

In the phase II study, INIONIS-FB-L Rx also demonstrated a favorable safety and tolerability profile. Complete data from this mid-stage study has been submitted for presentation at an upcoming medical conference.

Roche will lead the phase III study of IONIS-FB-L Rx and will also be responsible for the candidate’s future global development, commercialization and regulatory activities. 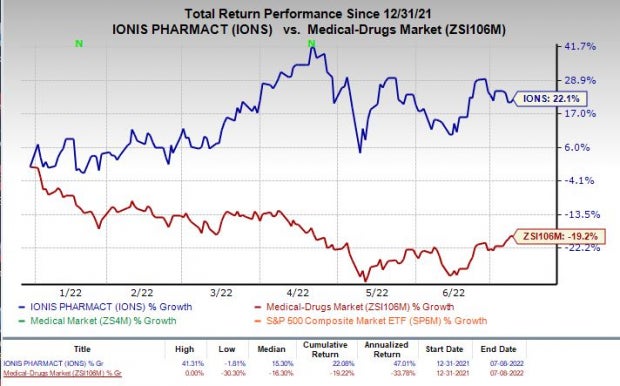 Ionis and Roche inked a deal to develop IONIS-FB-L Rx to treat complement-mediated diseases in 2018. Back then, Roche made an upfront payment of $75 million to Ionis.

Presently, INOIS-FB-L Rx is also being evaluated in phase II GOLDEN clinical study to determine whether it can halt or slow down the progression of GA due to AMD.

Under the terms of the present deal, Ionis will receive $55 million from Roche for licensing IONIS-FB-L Rx for IgAN and for achieving a development milestone in the GOLDEN study.

Alynylam (ALNY - Free Report) also has a phase III candidate for IgAN in its portfolio.

Alnylam is developing cemdisiran, an investigational RNAi therapeutic targeting the C5 component of the complement pathway, in collaboration with Regeneron Pharmaceuticals (RGEN - Free Report) for the treatment of IgAN

Per the phase II study, treatment with cemdisiran resulted in a 37% mean reduction from baseline in the 24-hour urine protein to creatinine ratio relative to placebo — the study’s primary endpoint.

Alnylam and Regeneron’s have decided to advance cemdisiran into phase III development in IgAN, after the positive phase II results.