Inflation showed no signs of cooling in June, with prices up 9.1% from a year ago to top estimates. Costs were up nearly across the board and are essentially washing away Americans’ wage gains. U.S. consumers are already feeling historically beaten down as they watch gas prices and grocery bills surge, and their sentiment is unlikely to improve until prices drop.

The Fed is focused almost exclusively on the stable price side of its dual mandate. The hotter-than-projected CPI print, coupled with the strong June jobs report increases the likelihood that the Fed will raise rates by at least another 75 basis points at its next FOMC meeting on July 26 and 27—its last meeting until September 20-21.

Jay Powell and Co. admittedly stuck to their transitory stance for too long and now they are completely committed to doing all they can to bring prices down and prevent 40-year high inflation from becoming entrenched in the U.S. economy.

Even if the U.S. is headed for a recession, or already in one (depending on who you ask), it doesn’t mean we are in for an abrupt, lockdown-style demand evaporation. Life goes on and spending continues, just not to the same extent as it did during the post-covid boom.

Recessions and economic ebbs and flows are part of life, and they impact some industries and sectors more.

Today, we dive into three stocks that are poised to beat inflation and rise above any possible recession. All three names appear worth buying for the second half of 2022 and might be up for consideration as buy-and-hold stocks.

Dollar Tree operates over 15,500 stores across much of the U.S. and Canada. The discount retailer late last year raised its prices for the first time in history from $1 to $1.25, and it completed its new pricing rollout a few months ahead of schedule. The higher prices allow Dollar Tree to sell a wider range of merchandise, while maintaining some of the lowest prices in retail, fighting back against inflation, and improving margins.

Dollar Tree steadily grew its revenue for decades and it’s poised to thrive as more Americans look to save money. DLTR upped its guidance last quarter in the face of economic downturn fears, with its positive EPS revisions helping it land a Zacks Rank #1 (Strong Buy). Zacks estimates call for its revenue to climb 6.7% in 2022 and another 6% in FY23 to $29.76 billion to help lift its adjusted earnings by 41% and 16%, respectively. 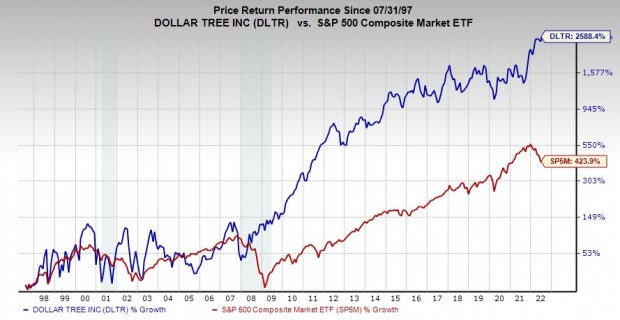 DLTR sits around 5% below its April records at around $166 per share. Plus, it trades at a 24% discount to its own decade-long median and offers 15% value compared to its industry’s current levels at 19X forward earnings.

Dollar Tree is committed to long-term expansion within a segment of the retail sector that’s never going out of style during economic booms or busts. The firm’s growth initiatives are supported by a solid balance sheet. And its $1.25 price point is set to boost its earnings and revenue growth over the long haul.

Discount retail is a somewhat recession-proof space, as is the wider healthcare field, for obvious reasons.

AbbVie is a pharmaceutical giant that’s more diversified than ever and far less exposed to Humira’s growth, through its $63 billion purchase of Allergan in 2020. The deal came as Humira biosimilars hurt sales of one of the world’s top-selling drugs. AbbVie now owns Botox and other popular drugs, within a diversified portfolio that features immunology, oncology, neuroscience, a strong R&D pipeline, and beyond.

AbbVie’s revenue soared 38% in FY20 and 23% in fiscal 2021, driven by the acquisition. ABBV’s adjusted earnings also jumped 20% last year. Zacks estimates call for its adjusted FY22 earnings to pop another 10.2% on 6.1% higher sales that would see it pull in roughly $60 billion. Its revenue and EPS are expected to slip on a YoY basis in FY23 as its Allergan-boosted growth normalizes and it faces tough-to-compete against periods.

AbbVie’s earnings outlook has held up rather well recently, and its FY23 consensus EPS estimate is up slightly to help it grab a Zacks Rank #2 (Buy). The firm’s Large Cap Pharmaceuticals industry sits in the top 33% of 250 Zacks industries and ABBV lands an overall “A” VGM grade. And eight of the 15 brokerage recommendations Zacks has are “Strong Buys,” alongside one “Buy,” and five “Holds.”

AbbVie’s dividend yield comes in at 3.7% to crush its highly-ranked industry’s 2.5% average, as well as Johnson & Johnson’s 2.8% and Merck’s 2.9%. ABBV is committed to boosting its dividend payout, with the quarterly rate up 250% since its inception in 2013. Crucially, AbbVie’s impressive and industry-topping yield isn’t bolstered by a falling stock price.

ABBV has outpaced the market and more than doubled its industry since it began trading in early 2013, up 335%. The stock has climbed 50% in the last two years and 28% in the trailing 12 months vs. Large Cap Pharma’s 16%. AbbVie stock is up 11% in 2022, and it’s slipped to potentially more attractive price points off its April peaks.

ABBV trades at $150 per share which provides 10% upside to its current Zacks consensus price target. Investors will also love the pharmaceutical stock’s valuation. ABBV trades at a roughly 20% discount to its industry, despite its outperformance, at 11.9X forward 12-month earnings. And the stock sits near its historic median and 30% below its own highs.

Sysco is a wholesale food and food products giant with clients across restaurants, healthcare, education, hotels, and nearly the entire away-from-home meal market. SYY’s product categories on the food side include meat & poultry, seafood, produce, dairy, bakery & desserts, pantry staples, and beyond. Sysco also sells paper goods, equipment, supplies, and more. And it operates a services unit that ranges from training materials and recipe ideas to cost-based analysis.

Sysco’s food-away-from-home market is almost indestructible and as close to recession-proof as possible. The only time its revenue declined at any point in the past 25 years was a tiny 1.8% dip in fiscal 2009 and slightly larger pullbacks during covid when many of its clients abruptly closed their doors for extended periods.

SYY’s FY21 (ended on July 3, 2021) sales slipped 3%. But it’s bouncing back as people return to their normal lives. Sysco’s Q3 FY22 sales climbed 43% YoY and were up 15% from the pre-covid period in 2019. Sysco raised its guidance in the face of inflation, with it able to pass on higher costs and steer clients to less-impacted segments. Sysco’s upward earnings revisions help it capture a Zacks Rank #1 (Strong Buy), and eight of the 11 brokerage recommendations Zacks has are “Strong Buys.”

In terms of performance, Sysco has climbed roughly 200% during the past decade to match the S&P 500 and destroy its highly-ranked industry’s 45%. This run includes a 55% jump in the last two years and a 10% climb in 2022 vs. its industry’s -3% drop. SYY currently sits 5% below its April highs. On the valuation side, it’s trading at its decade-long median at 19.7X forward 12-month earnings and nearly in line with its industry.

Sysco’s standing as a Dividend Aristocrat cements its stability through good economic times and bad. The select group of around 65 stocks includes S&P 500 companies that have both paid and raised dividends for at least 25 straight years. SYY’s dividend yield comes in at 2.3% right now to blow away its industry’s average and the S&P 500’s 1.6%.