Barring one-time items, adjusted earnings per share came in at $6.73, topping the Zacks Consensus Estimate of $6.34.

Net sales in the quarter increased roughly 39% year over year to a record $6,212.9 million. The figure beat the Zacks Consensus Estimate of $6,066.3 million.

The company generated around $1 billion cash flow from operations in the second quarter.

Steel Dynamics also stated that operations continue to ramp up at its Sinton Flat Roll Steel Milland achieved run rates of 80%. It expects to realize meaningful improvement for the balance of the year.

It recently announced a planned investment in a new state-of-the-art low-carbon aluminum flat rolled mill continues its strategic growth. It is aligned with its core steelmaking and recycling platforms, benefits many existing customers, and provides for future value creation. STLD is well-placed for sustainable long-term growth and value creation, the company noted.

Shares of Steel Dynamics have gained 15.2% in the past year against a 20.3% decline of the industry. 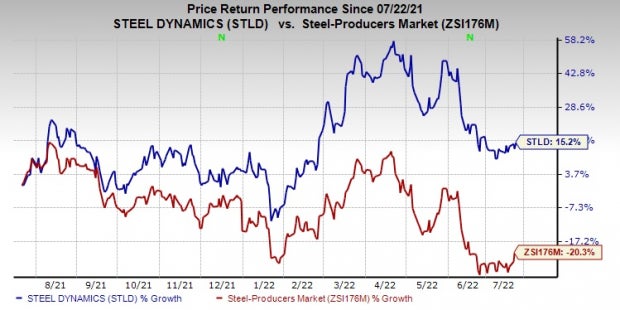 Albemarle has a projected earnings growth rate of 239.1% for the current year. The Zacks Consensus Estimate for ALB's current-year earnings has been revised 20.5% upward in the past 60 days.

Albemarle’s earnings beat the Zacks Consensus Estimate in each of the last four quarters. It has a trailing four-quarter earnings surprise of roughly 22.5%, on average. ALB has gained around 13.9% in a year and currently carries a Zacks Rank #2 (Buy). You can see the complete list of today’s Zacks #1 Rank stocks here.

Cabot’s earnings beat the Zacks Consensus Estimate in each of the trailing four quarters, the average being 16.2%. CBT has gained around 32% over a year.

Sociedad has a projected earnings growth rate of 422.4% for the current year. The Zacks Consensus Estimate for SQM’s current-year earnings has been revised 75.3% upward in the past 60 days.

Sociedad’s earnings beat the Zacks Consensus Estimate in two of the trailing four quarters, the average being 28.2%. SQM has gained 77.4% in a year. The company sports a Zacks Rank #1.