Volkswagen (VWAGY) CEO to Resign, Porsche CEO to Take Over

Volkswagen AG (VWAGY - Free Report) announced on Jul 22, 2022 that the company’s CEO, Herbert Diess, will be shortly stepping down from his position and will be replaced by Porsche’s counterpart, Oliver Blume.

The announcement, which came as a surprise, stated that the resignation has been over a mutual agreement with the company and Diess will exit on Sep 1. Blume, besides taking over his new responsibilities, will continue to be the head of the sports car marque. Diess’ image had already been maligned in the fallout from the German automaker’s Dieselgate emissions cheating scandal that broke out in 2015. His spat with labor representatives and his aggressive dealing have likely been the final nail in the coffin.

The Dieselgate emissions scandal ensued after around 11 million company cars, worldwide, and 1.2 million in Britain, were alleged to have been fitted with software that hoodwinked diesel emission tests designed to limit nitrogen oxide car fumes. It has gone down as one of the costliest corporate scandals in history with Volkswagen shelling out billions in settlements. Recently, in May, Volkswagen stated that it will pay £193 million to settle 91,000 out-of-court legal claims in England and Wales over the scandal.

Herbert Diess had been hired as CEO at VWAGY in 2018 after there was a need for an outsider, who was not soiled by the scandal. Since then, he had steered Volkswagen away from the scandal and into a promising and EV-defined future to make the company a leader in the electrification domain. Under his tenure, the company made huge strides in electrification, and remains on track to go on to be one of the leaders in EV sales of the decade.

So strong was his focus on bolstering electrification drives that he pressed on pitching for output targets along the lines of the EV giant Tesla Inc. (TSLA - Free Report) . He harped on the need to reduce headcount and bring down Volkswagen’s 30 hours required in the making of one EV to compete with Tesla’s 10 hours. However, his plan to scrap off 30,000 jobs in Germany did not go down well with labor unions who were enraged at the CEO. Also, per media reports, the program to transition to electric power has probably been considered as overly ambitious.

To add to the woes, the company’s business in China hasn’t been performing as expected. Also, there have been complaints regarding the poor quality of the software in its first electric car, the ID.3 and in its other electric models. It is believed that Diess failed to get the software problems under control. Moreover, in 2022, the company shares performed dismally. Its preferred shares hit about €193 in January and have fallen about 30%, just more than €134, on the day of the announcement.

Volkswagen’s management is controlled majorly by the unions and the Porsche and Piëch families, which own a majority of the voting shares in the company. It is, therefore, not unusual that Diess lost the support of the unions.

Volkswagen will now have a fresh face in the leadership position. However, all eyes will be on Blume and his strategy to win back market share in China and mitigate the ongoing software challenges that the company has been facing.

Shares of Volkswagen have lost 43.7% over the past year compared with its industry’s 29.4% decline. 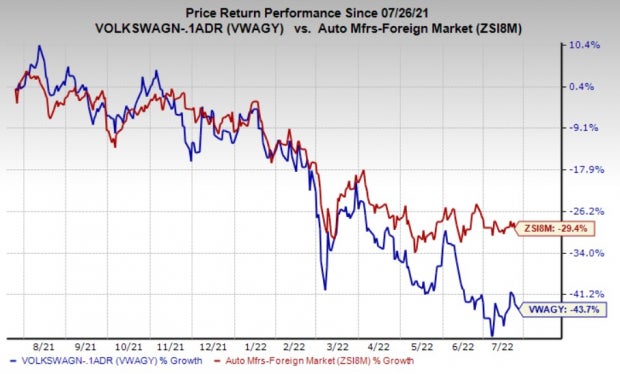 American Axle has an expected earnings growth rate of 89.4% for 2023. The Zacks Consensus Estimate for current-year earnings has been revised 1.2% in the past 30 days.

American Axle’s earnings beat the Zacks Consensus Estimate in three of the trailing four quarters and missed in one. AXL pulled off a trailing four-quarter earnings surprise of 847.92%, on average. The stock has declined 9.8% in the past year.

Standard Motor has an expected earnings growth rate of 5.2% for the current year. The Zacks Consensus Estimate for current-year earnings has remained constant in the past 30 days.

Standard Motor’s earnings beat the Zacks Consensus Estimate in all the trailing four quarters. SMP pulled off a trailing four-quarter earnings surprise of 40.34%, on average. The stock has risen 7.5% over the past year.