Shares of NWL fell more than 2% at the close of the trading session on Jul 29, following the slashed 2022 view due to continued inflation and unfavorable currency impacts. In the past three months, shares of the company have lost 9.9% compared with the industry’s 3.6% decline. 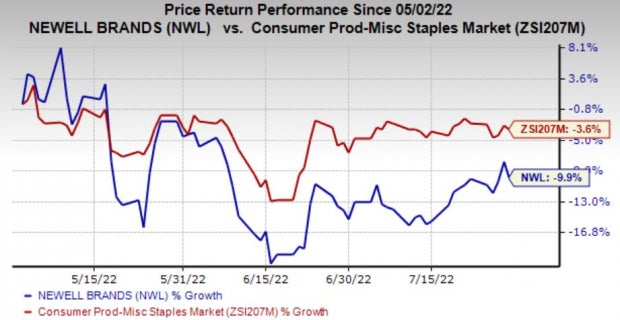 The Zacks Rank #3 (Hold) company’s second-quarter normalized earnings per share of 57 cents outpaced the Zacks Consensus Estimate of 47 cents. Also, the metric grew slightly from 56 cents earned a year ago.

Net sales fell 6.5% year over year to $2,534 million and lagged the Zacks Consensus Estimate of $2,537 million. This includes the adverse impacts of the sale of the Connected Home & Security (CH&S) business, unfavorable foreign currency, and exit of its category and retail store.

However, core sales grew 1.7%, as four of the seven business units witnessed higher core sales, as well as robust demand across the majority of its categories. This marks the 8th successive quarter of core sales growth.

Net sales in the Commercial Solutions segment were $429 million in the second quarter, down 13% from the prior-year period’s number. The metric surpassed the Zacks consensus mark of $410.4 million. Core sales improved 10.7% year over year. On the flip side, the adverse impact of the sale of the CH&S business and unfavorable foreign currency impacts acted as deterrents.

The Home Appliances segment recorded net sales of $346 million in the second quarter, down 12.2% from the prior-year quarter. Also, the metric lagged the Zacks consensus mark of $365.1 million. Core sales also declined 4% due to foreign-exchange headwinds and the negative impacts of exits from the low-margin categories.

Net sales at the Home Solutions segment (Food, Outdoor products, Home Fragrance, and Connected Home & Security) totaled $467 million, down 11% from the prior-year period. The segment’s top line was mainly fueled by a core sales decline of 8.5% due to sluggishness in both the Home Fragrance and Food businesses, the closure of 42 underperforming Yankee Candle stores in the first half of 2022, and unfavorable currency impacts. Also, the metric missed the Zacks consensus mark of $490.3 million.

The Learning and Development segment recorded net sales of $865 million, which grew 2.5% from the prior-year quarter’s reading. The metric beat the Zacks consensus mark of $848.4 million. The uptrend is led by a 5.7% increase in core sales, resulting from strength in the Writing and the Baby businesses. Adverse currency rates also affected the segment’s sales in the quarter.

The Outdoor and Recreation segment’s net sales of $427 million declined 5.7% from the prior-year quarter. Also, the metric lagged the Zacks consensus mark of $436.6 million. However, core sales growth of 2.5% was offset by foreign-exchange headwinds and negative impacts of exits from the low-margin categories.

Newell Brands ended the quarter with cash and cash equivalents of $323 million, long-term debt of $3,793 million, net debt outstanding of $4.9 billion, and shareholders’ equity of $3,947 million, excluding non-controlling interests. In the six months ending Jun 30, 2022, the company repurchased $325 million of its common shares with $50 million remaining under its existing share repurchase authorization. NWL also used $450 million for operating activities in the said period.

Management slashed its guidance for 2022 to reflect the adverse impacts of unfavorable foreign currency as well as inflation. The company anticipates net sales of $9.76-$9.98 billion, down from the earlier mentioned $9.93-$10.13 billion. Core sales are still expected to be flat to up 2%, excluding the contribution from the CH&S business.

For third-quarter 2022, net sales are envisioned to be $2.39-$2.50 billion, with a core sales decline of 1-5%. For the quarter, the company expects a normalized operating margin of 10.7-11% and normalized earnings of 50-54 cents per share. The guidance includes the impacts of unfavorable foreign currency, closures of Yankee Candle stores, and the exit of certain product categories, particularly in the Outdoor & Recreation and Home Appliances segments.

Sysco, the marketer and distributor of food and related products, currently sports a Zacks Rank #1 (Strong Buy). SYY has a trailing two-quarter earnings surprise of 93.75%, on average. It has an expected long-term earnings growth rate of 11%.

The Zacks Consensus Estimate for Chef Warehouse’s current financial-year sales and earnings per share suggests growth of 38.1% and 2540%, respectively, from the year-ago reported numbers.