Molson Coors Beverage Company (TAP - Free Report) has reported second-quarter 2022 results, wherein earnings surpassed the Zacks Consensus Estimate, while sales lagged the same. Both metrics declined year over year. Results have been hurt by inflationary pressures, a strike at its Quebec brewery and the cycling of a solid shipment in the prior-year quarter.

The company has also highlighted that it is making efforts to change the shape of its product portfolio and expand in growth areas. Its U.S. above-premium portfolio witnessed sales that outpaced its U.S. economy portfolio, driven by rapid growth of its hard seltzers, the successful launch of Simply Spiked Lemonade, and the continued strength in Blue Moon and Peroni’s.

Shares of TAP fell more than 7% before the trading session on Aug 2. However, the Zacks Rank #3 (Hold) stock has gained 13.2% in the past three months compared with the industry’s growth of 0.9%. 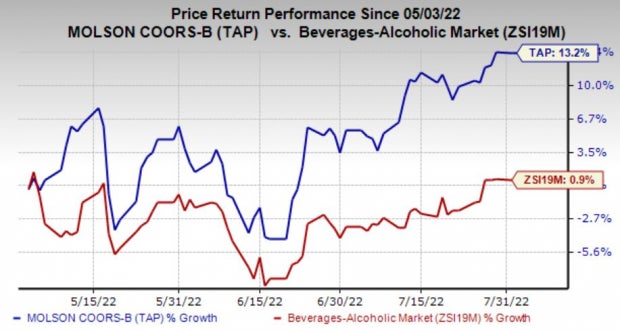 The company’s adjusted earnings of $1.19 per share declined 24.7% year over year but surpassed the Zacks Consensus Estimate of $1.18.

Net sales fell 0.6% to $2,921.7 million and missed the Zacks Consensus Estimate of $2,976 million. On a constant-currency (cc) basis, net sales rose 2.2% due to positive pricing, and favorable brand and channel mix stemming from portfolio premiumization and fewer on-premise channel restrictions, somewhat offset by a decline in financial volumes.

Molson Coors’ worldwide brand volumes fell 1.8% to 21.7 million due to sluggishness in the America segment, stemming from softer industry performance and the impacts of the Québec labor strike, as well as slight weakness in the EMEA and APAC as a result of the Russia-Ukraine conflict. On the flip side, strength across Western Europe, and Central and Eastern Europe acted as an upside.

Financial volumes declined 4.6% to 22.7 million hectoliters due to the cycling of lower U.S. distributor inventory levels in the prior year, lower shipments in Canada in the reported quarter. On the flip side, higher volumes in EMEA&APAC driven by a rise in brand volumes in Western Europe, as well as Central and Eastern Europe, along with higher factored volumes remained upsides.

North America: Net sales in the segment fell 2.3% to $2,367.4 million on a reported basis and 1.7% at cc due to an 8.1% decline in financial volumes, which partly offset favorable pricing and the positive sales mix. Financial volumes declined 8.1% year over year due to reduced U.S. domestic shipments stemming from the cycling of U.S. distributor inventory levels in the prior year and the Texas storm. Also, a decline in Canada shipments due to the Québec labor strike hurt volumes.

Meanwhile, North America brand volume dropped 2.2% on a 1.7% fall in the United States, owing to softer industry performance. Brand volume fell 8% in Canada due to the Québec labor strike, while the metric grew 1.8% in Latin America.

Net sales per hectoliter, on a brand volume basis, rose 6.2% at cc on a favorable brand mix and higher net pricing. Underlying EBITDA decreased 20% on a reported and cc basis to $348.1 million, owing to a decline in financial volumes, cost inflation and a rise in MG&A spend, somewhat offset by favorable pricing, reduced depreciation expenses and a positive sales mix.

EMEA & APAC: The segment’s net sales (on a reported basis) rose 7.2% to $558.2 million and 20.5% at cc. The uptick was due to financial volume growth, favorable pricing and a positive sales mix. Net sales per hectoliter (on a brand volume basis) for the segment advanced 15.5% at cc, resulting from a favorable sales mix, as well as higher pricing.

The segment’s underlying EBITDA declined 34.3% on a reported basis to $34.7 million and 22.7% at cc on cost inflation, particularly in materials, transportation and energy costs, as well as higher MG&A spend. However, higher financial volumes, favorable pricing and sales mix acted as upsides.

In the six months ending Jun 30, 2022, the company provided $666.8 million in cash for operating activities, resulting in an underlying free cash flow of $287.2 million.

The company paid out a quarterly dividend of 38 cents on its class A and class B common shares on Jun 15. In the six months ending Jun 30, 2022, TAP bought back 510,000 shares worth $26.2 million. It also approved a share-repurchase program, wherein the company can purchase up to an aggregate of $200 million worth of its Class B common stock till Mar 31, 2026.

Despite the continued uncertainties related to the pandemic, as well as rising cost inflation, management has retained the 2022 view. Net sales are projected to grow in the mid-single digits at cc. Underlying EBITDA is likely to grow year over year in the high-single digits at cc. Management estimates achieving a net debt to underlying EBITDA ratio below 3.0X by 2022.

Sysco, the marketer and distributor of food and related products, currently sports a Zacks Rank #1 (Strong Buy). SYY has a trailing two-quarter earnings surprise of 93.75%, on average. It has an expected long-term earnings growth rate of 11%. You can see the complete list of today’s Zacks #1 Rank stocks here.

The Zacks Consensus Estimate for Chef Warehouse’s current financial-year sales and earnings per share suggests growth of 38.1% and 2540%, respectively, from the year-ago reported numbers.