United Therapeutics (UTHR - Free Report) reported earnings of $2.41 per share in second-quarter 2022, missing the Zacks Consensus Estimate of $4.10 per share. Earnings were $3.65 per share in the year-ago quarter.

Revenues for the reported quarter were $466.9 million, which beat the Zacks Consensus Estimate of $463 million. Revenues rose 4.6% year over year driven by revenue growth of Tyvaso and Orenitram.

Shares of United Therapeutics have returned 4% in the year-to-date period, against the industry’s decline of 20.3%. 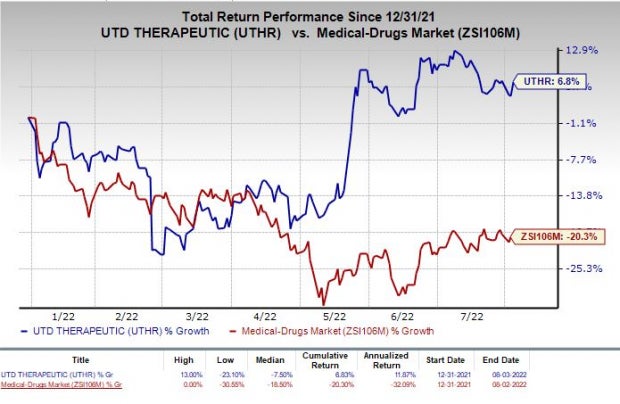 Tyvaso sales totaled $201.0 million, up 31% year over year, gaining from higher volumes due to patient growth, following the label expansion approval for the PH-ILD indication in 2021.

United Therapeutics ended the reported quarter with a record number of patients, adding approximately 500 Tyvaso patients to its portfolio. The company expects around 6,000 U.S. patients on Tyvaso therapy by the end of 2022. United Therapeutics is approximately halfway toward the goal, with about 4,900 active patients on Tyvaso therapy at the end of the second quarter.

Orenitram sales amounted to $79.0 million in the reported quarter, up 4% year over year owing to higher volumes (driven by the FREEDOM-EV label expansion) and price increases.

Remodulin sales were $132.0 million, down 6% year over year, due to reduced sales in the United States. The decline has been partially offset by lower gross-to-net deductions.

Unituxin sales reached $44.5 million, down 16.2% year over year. The decline can be attributed to lower volumes due to unfavorable timing of orders by the company’s distributors. The decline was partially offset by a price increase of Unituxin.

Adcirca sales were $10.4 million, down 56% year over year. The erosion in sales can be attributed to a higher gross-to-net deductions, and lower volumes due to generic competition for Adcirca.

United Therapeutics is working on expanded indications for Orenitram and Tyvaso. Seven phase III studies are ongoing across various forms of pulmonary hypertension and pulmonary fibrosis.

In May 2022, the FDA approved Tyvaso dry powder inhalation (DPI) formulation for pulmonary arterial hypertension (PAH) and pulmonary hypertension associated with interstitial lung disease (PH-ILD). The DPI formulation of treprostinil will be administered using only a dry powder inhaler approved by the FDA for use in PAH and PH-ILD Shortly after the approval, United Therapeutics started its launch activities for the drug and the drug-device combination therapy for patients became available in June.

The drug-device product offers some benefits over the nebulized Tyvaso Inhalation Solution, which is already approved in the United States to treat PAH and PH-ILD. Tyvaso DPI has the potential to expand Tyvaso’s use in both Group 1 and Group 3 pulmonary hypertension.

Key phase III programs include Tyvaso in WHO Group 3 pulmonary hypertension (PH) patients who have COPD (PERFECT study), Tyvaso in patients with various forms of chronic fibrosing interstitial lung disease (TETON studies) and oral ralinepag (PAH — ADVANCE CAPACITY and ADVANCE OUTCOMES studies). The first TETON study in patients with idiopathic pulmonary fibrosis (IPF) is currently enrolling patients. The second phase III study of Tyvaso in IPF patients, TETON 2 will be conducted outside of the United States and is expected to commence soon. Enrollment is ongoing in the PERFECT, ADVANCE CAPACITY and ADVANCE OUTCOMES studies.

Verrica’s loss estimates for 2022 have narrowed down from $1.26 to $1.13 in the past 30 days. Shares of Verrica have declined 66.7% year to date. Earnings of VRCA beat earnings estimates in all the last four quarters. VRCA delivered an earnings surprise of 28.45%, on average.