Quarterly revenues of $876.4 million rose 5% year over year, owing to sales growth in the Orphan segment especially solid growth in Krystexxa, which is approved for treating uncontrolled gout. Sales, however, missed the Zacks Consensus Estimate of $936 million.

Shares of Horizon plunged in pre-market trading on Wednesday owing to the weaker-than-expected earnings results. The stock has declined 23.7% so far this year compared with the industry’s decrease of 22.6%. 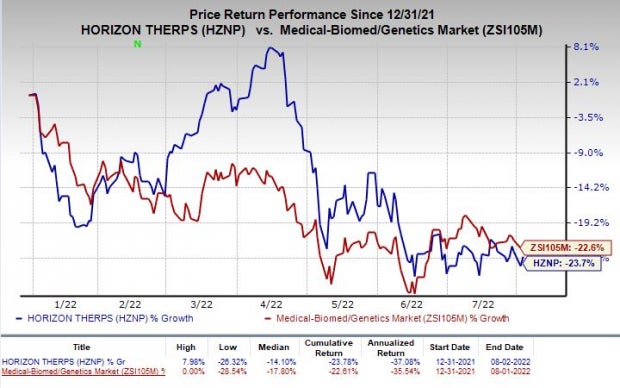 Sales in the Orphan segment were $841.3 million, up 13% from the prior-year figure, driven by the strong sales growth in Krystexxa, as well as the continued growth of drugs like Uplizna, Ravicti, Actimmune and Tepezza. The segment represented around 96% of the total second-quarter net sales.

Krystexxa sales rose 29% year over year to $167.8 million. Tepezza generated net sales of $479.8 million in the second quarter, up 6% year over year. Tepezza, which is approved for treating thyroid eye disease, was relaunched in the United States in April 2021 after sales were negatively impacted by a short-term supply disruption due to U.S. government-mandated COVID-19 vaccine orders.

Procysbi sales were $47.7 million in the quarter, down 4% year over year.

Actimmune sales were $30 million in the quarter, up 8% year over year.

However, net sales in the Inflammation segment were $35.1 million, down 59% year over year.

The company now expects net sales in the range of $3.53-$3.60 billion compared with the previous expectation of $3.9-$4.0 billion for 2022. The Zacks Consensus Estimate for the metric is pegged at $3.97 billion. This might have hurt investors’ sentiments and also resulted in the stock going down in pre-market trading on Wednesday.

Krystexxa, until now, was approved as a monotherapy for the treatment of adult patients with chronic gout refractory to conventional therapies, also called uncontrolled gout.

In March 2022, the FDA granted priority review to the above-mentioned sBLA for Krystexxa.

Earnings of Beam Therapeutics have surpassed estimates in three of the trailing four quarters and missed on the remaining occasion. BEAM delivered an earnings surprise of 1.80%, on average.

Earnings of Atara Biotherapeutics have surpassed estimates in two of the trailing four quarters and missed the same on the other two occasions. ATRA delivered an earnings surprise of -12.51%, on average.