Adjusted earnings per share (excluding 29 cents from non-recurring items) of $1.53 beat the consensus mark by 7.8% and grew 30.8% on a year-over-year basis. The upside was backed by organic growth within the business, lower provision for income taxes, decreased interest expenses and a fall in average share count.

Revenues of $746.3 million beat the consensus estimate by 0.1% but decreased 0.2% year over year on a reported basis and 5.3% on an organic constant-currency (cc) basis. The decline in revenues was primarily due to the sale of environmental health and safety business (3E) and Verisk Financial Services.

Over the past year, shares of Verisk have improved 0.8% against the 15.1% decline of the industry it belongs to. 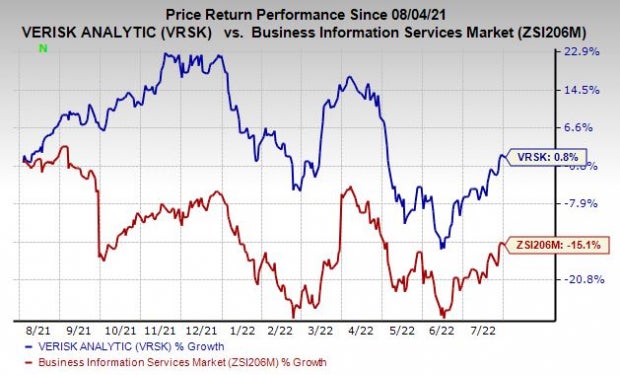 Insurance segment revenues totaled $610 million, up 10.9% year over year on a reported basis and 6.4% on an organic cc basis.

Within the segment, underwriting and rating revenues of $437.8 million rose 12.8% on a reported basis and 7.1% on an organic cc basis. The upside was primarily driven by an annual increase in prices derived from the continued enhancements of the content of solutions within our industry-standard insurance programs as well as the sale of expanded solutions to the existing customers in commercial and personal lines. In addition, extreme event and life solutions  contributed to growth.

Claims revenues amounted to $172.2 million, improving 6.5% on a reported basis and 4.7% on an organic cc basis. The top line was primarily driven by claims analytics revenues and property estimating solutions.

The Energy and Specialized Markets segment’s revenues of $133.5 million decreased 17.7% year over year on a reported basis but increased 0.8% on an organic cc basis. The fall in revenues was primarily due to the sale of the 3E business that closed on Mar 11, 2022, and the suspension of commercial operations in Russia. However, organic cc growth was driven by modest growth in research revenues.

During the June quarter, Verisk paid out a total cash dividend of $49.2 million.

Recent Performances of Some Other Business Services Companies