Deciphera Pharmaceuticals, Inc. (DCPH - Free Report) reported a second-quarter 2022 loss of 60 cents per share, narrower than the Zacks Consensus Estimate of a loss of 65 cents. In the year-ago quarter, the company had reported a loss of $1.21.

Total net revenues were $32.5 million in the quarter, which surpassed the Zacks Consensus Estimate of $30 million. Revenues rose almost 38% year over year.

Shares of Deciphera were up 23.9% on Thursday owing to the better-than-expected earnings results. The stock has skyrocketed 72% in the year against the industry’s decline of 19.7%. 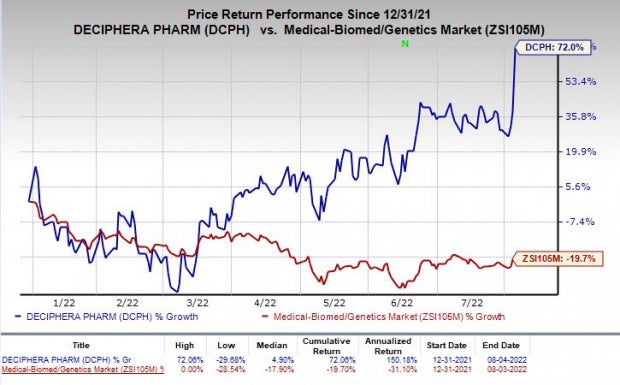 In May 2020, the FDA approved Deciphera’s sole marketed drug, Qinlock (ripretinib), to treat adult patients with advanced gastrointestinal stromal tumors (“GIST”), who have received prior treatment with three or more kinase inhibitors, including Gleevec (imatinib).

Collaboration revenues in the reported quarter were $1 million compared to $1.5 million recorded in the year-ago quarter.

Research and development expenses were $44.9 million, down 25.2% year over year, owing to lower costs related to clinical studies on Qinlock.

Selling, general and administrative expenses were $29.6 million, down 9.7% year over year, owing to lower professional and consultant fees.

In November 2021, the European Commission approved Qinlock for treating adult patients with advanced GIST who have received prior treatment with three or more kinase inhibitors, including Novartis’ Gleevec. The nod in Europe is already generating incremental sales and is expected to do the same in future quarters.

Per the company, Germany’s Federal Joint Committee (G-BA) has issued a “major additional benefit” rating to Qinlock. The drug has now become the first orphan oncology treatment to receive this rating in Germany. It is also the only GIST treatment to win this recognition.

Deciphera is evaluating vimseltinib in the phase III MOTION study for the treatment of patients with tenosynovial giant-cell tumors, who are not amenable to surgery.

The company is also planning to initiate three phase Ib studies on DCC-3116 in combination with FDA-approved MEK inhibitor, trametinib, binimetinib as well as sotorasib, an FDA- approved KRASG12C inhibitor, for treating patients with advanced or metastatic solid tumors in the second half of 2022.

Earnings of Beam Therapeutics have surpassed estimates in three of the trailing four quarters and missed on the remaining occasion. BEAM delivered an earnings surprise of 1.80%, on average.

Earnings of Atara Biotherapeutics have surpassed estimates in two of the trailing four quarters and missed on the other two occasions. ATRA delivered an earnings surprise of -12.51%, on average.