Revenues increased 4.3% year over year to $80.7 million for the second quarter, missing the Zacks Consensus Estimate of $85 million. Revenues were entirely derived from the sales of Galafold (migalastat), approved for Fabry disease.

Shares of Amicus Therapeutics have slumped 5.3% in the year compared with the industry’s 19.1% decline. 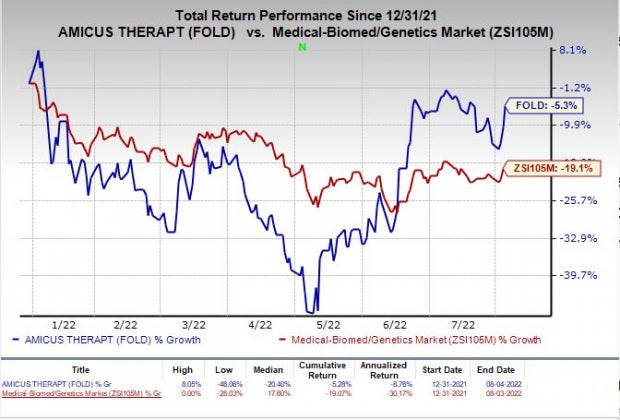 Revenues in the second quarter were driven by strong new patient accruals but were partially offset by order timing in certain ex-US markets and foreign currency impact.

Amicus Therapeutics expects cash resources and revenues to be enough to support operations and the ongoing research programs through self-sustainability. FOLD anticipates achieving profitability by 2023.

For the full year, Amicus Therapeutics expects total Galafold revenues of at least $350-$365 million, driven by continued patient demand and commercial execution across all major markets, including the United States, the EU, the U.K. and Japan.

Adjusted operating expenses for the year are estimated in the range of $470-$485 million, driven by continued investments for the global Galafold launch, AT-GAA clinical studies and pre-launch activities.

The lead pipeline candidate in Amicus Therapeutics’ portfolio is AT-GAA, developed as a potential treatment for Pompe disease. The FDA extended the target action dates to Aug 29, 2022, for the New Drug Application (NDA) and Oct 29, 2022, for the Biologic License Application (BLA), reflective of the two components of AT-GAA.

In the EU, Amicus Therapeutics completed the marketing authorization application (MAA) submissions for AT-GAA in fourth-quarter 2021. A positive opinion on the MAA by the EMA’s Committee for Medicinal Products for Human Use (CHMP) is expected later this year.

BioNTech’s earnings estimates for 2022 have improved from $33.18 to $34.28 in the past 30 days. Shares of BioNTech have declined 29.3% year to date. Earnings of BNTX beat earnings estimates in all the last four quarters. BNTX delivered an earnings surprise of 56.87%, on average.

Pliant Therapeutics’ loss estimates for 2022 have narrowed from $3.36 to $3.20 in the past 30 days. Shares of Pliant Therapeutics have returned 28.6% year to date. Earnings of PLRX beat earnings estimates only once in the last four quarters.PLRX delivered an earnings surprise of 0.90%, on average

Scholar Rock’s loss estimates for 2022 have narrowed from $2.59 to $2.48 in the past 30 days. Shares of SRRK have declined 71.7% year to date. Earnings of BNTX beat earnings estimates in two of the trailing four quarters and missed the same on the remaining two occasions.SRRK delivered an earnings surprise of 13.12%, on average.